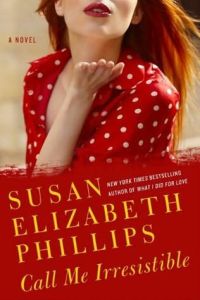 I’m really excited to blog about a Susan Elizabeth Phillips novel because I’m her biggest fan, ever since I first cracked open Nobody’s Baby But Mine more than a decade ago. She is the only author I purchase on the merit of her name alone. Yes, she is that good. Here’s to hoping I don’t screw this up and gush throughout the entire entry. You guys have been forewarned.

I have to admit, while a part of me was excited about the coming of this book, I had a lot of reservations whether or not I would like it.

The plot was originally to get Theodore “Teddy” Beaudine –son of Francesca Seritella Day Beadine and Dallie Beaudine from Fancy Pants (one of my favorite SEP books) and Lady Be Good, and Lucy Jorik, adopted daughter of journalist Mat Jorik and US President Cornelia Case Jorik from First Lady, another SEP novel, to fall in love with each other. I was one of the fans who lobbied for the pairing, and I was probably one of the most excited when SEP announced that she was going to finally write their book. However, after a while, SEP changed her mind and decided to throw Meg Koranda, offspring of Hollywood legends Jake Koranda and Fleur Savagar from Glitter Baby, into the picture.

Meg is another familiar character. She was first introduced to readers as a child, and then she made another appearance very recently in another book, What I did for Love, as a supporting character. Personally, I didn’t quite like how she turned out. She was irrepressible and spoiled and very immature, and seemed to assume that she will always get her way. Teddy is the exact opposite. He’s a genius, is gorgeous, kind and courteous to everyone (Having a British mom could do that to you). I now see that these were the exact reasons SEP chose her to shake up Ted’s world.

However, I was still holding out hope that SEP would see how perfect Lucy was for Ted. I didn’t really get how Susan could forget what a spitfire Lucy was during her childhood to dismiss her as too boring. I sounded off on an email. (She answers personally as much as she can and this was her reply.)

Sigh… Angie, you’re just going to have to trust me.  Lucy and Ted were the world’s most boring match. That book would never have gotten written.  (I just started Lucy’s book this week!) –

So, in short, there was no more hope. With my reservations in check, I buckled down to pick up the book. I resolved to give Meg a chance.I tried to warm up to her by rereading parts of Glitter Baby and What I did for Love but I still saw her as a third party that messed up Lucy’s ending. I just had to get that off my chest.

It was a slow start but it got better, as it always does with SEP books.

The story started at the eve of Lucy and Ted’s wedding, where Meg first met the groom. However, Meg felt that Ted was a bit too cool to be passionate about her best friend in the whole wide world and she expresses her reservations about the wedding. Lucy, who was feeling the pressure from her famous family, and from Ted’s side of the family (he is after all Wynette, Texas’ golden son, reluctant mayor and all around Mr. Perfect) — decided to not to go through with it, and begged off at the last minute. In her haste to leave, she forgets about Meg, the nomad who had been recently cut off by her family to push her to make something of herself, stuck with a $400 bill, a clunker for a car and nowhere else to go.

What I liked about the book was its return to the familiar town of Wynette where golf legend Dallie and Francie’s love story was written. This is actually the third visit as another professional and Dallie’s protege Kenny Traveler also fell in love with Lady Emma Wells Finch in this town. There was the reemergence of the unpredictable and always outspoken Torie Traveler (now O’ Connor) and several other characters from the previous books. In other words, the house is packed with a cast of old characters that will make your head spin. It was like a reunion of sorts and it gives a warm feeling to the readers who are familiar with who they are. For those who don’t, SEP gives sufficient backgrounders in reference to the characters, enough not to leave them out of the fun.

But even if it were a standalone novel and the reader had no inkling of who these characters were in their previous stories, I feel that the novel will still be relatable as it bears the trademark of SEP’s sharp wit and ever present humor. Readers will definitely be entertained, amused, and touched by the series of events that lead the two lead characters into each others arms. During the course of this journey, you laugh, you cry, you get frustrated and you feel all the emotions the characters are feeling. You just can’t resist jumping in and becoming part of Wynette’s citizenry.

Perhaps, another part of note was the book’s not too subtle hints to protect the environment and ways of how to do it. It was scattered in different parts of the story, ideas that could be harnessed by major industries and investors in golf courses in real life.

But I think that what makes SEP’s novels extraordinary are the familiar elements that she injects into each one of her books. The heroines are always spunky, smart and resourceful — women who have big hearts and strong characters — strong enough to withstand a whole town’s badmouthing or assaults on their character. Meg was no different from other SEP characters. In Call Me Irresistible, there was still traces of her rebellious streak, but this time, it was tempered with pride and determination to get out of her scrape by herself.

I felt that Teddy’s character was pretty much the same as in the previous books, except now, he’s all grown up. He is more remarkable not because of his evident qualities but rather because he cares about people enough to turn a blind eye to their antics, even if it puts him in a ridiculous predicament. He reminded me of Bobby Tom Denton (Heaven, Texas), who was always being taken advantage of by the people who knew him since he was little.

The supporting cast was also great — a sleazy egotistical businessman who has the town in the palm of his hand, his ambitious practical daughter, a lovestruck teen and countless others who drop in to spice up the story.

All in all, I thought Call Me Irresistible was a great book. I liked it a lot. I loved the dynamics among the characters but I didn’t love it like I loved many of SEP’s books, but that’s because of my bias in favor of Team Lucy. Barring that, I would strongly recommend this to everyone, and for sure, it will get you hooked to the world of SEP.

For more information on SEP’s other books, check out her website: http://susanelizabethphillips.com/