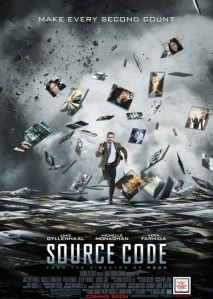 It’s been a while since I last saw a Jake Gyllenhaal movie (the last one was The Day After Tomorrow). The reason is really lame… I can’t seem to take him seriously because I keep picturing him as Bubble Boy, a frail teenage boy stuck inside a plastic bubble who goes on a cross country trip to stop his first love from getting married to the wrong guy, a role he played waaay back in 2001…

Err, so let’s get back to Source Code, shall we? Source Code’s plot deals with fighter pilot Capt. Colter Stevens (Gyllenhaal) waking up to find himself part of a revolutionary government program that deals with exploring the last eight minutes of memory of one of the victims of a train explosion, the first of a series of terrorist attacks aimed at reducing the city to rubble. In order to do so, he is forced to cross over a parallel reality into another man’s identity, and enact the last eight minutes of his host’s life but with his skills as a solider. Stevens’ task is to uncover the identity of the bomber to prevent him from launching the subsequent attacks, returning again and again to the eight minute string until his mission is completed. Click here to see trailer.

The premise of the story bears a slight resemblance to Denzel Washington’s Deja Vu except Steven’s mission was not intended to alter reality but rather to explore a parallel reality in order to change the course of the future in the original one. Confused? Stevens’ mission was not to save the people on the train since it will not change the course of the reality that has already happened. His mission involves the prevention of what was to come in the original reality, which involves the bombing of two more major areas in the city. In short, Stevens was not ordered to change the past but rather change the future by giving information that will affect what was to come in the true reality. However, the Source Code project, which was simply intended to explore the final eight minutes of a victim’s memory, actually created a parallel reality in which it was possible to prevent the bombing altogether. Each time Stevens returned to the Source Code, he began to discover something new and was able to accomplish something different, leading him to the conclusion that he could not stand idly by as the train exploded again for the nth time. Upon completing his mission, he feels compelled to return to the Source Code one more time to alter the events of the parallel reality and “save the world” and asks another soldier to give him a shot at saving the train on the alternate reality though it changes nothing on the original.

What I liked about movie was that it managed add something different to each return to the Source Code. Even in the beginning, where dialogs were repeated over and over, audiences will not find themselves bored but rather faced with the same pressure of accomplishing the impossible in the space of eight minutes before the train explodes anew and everyone dies (again). With each try, Stevens tries to find his footing, his priorities torn between his curiosity about his involvement in the program and his desire to do his duty and fulfill his mission. The film’s pacing, though slow in the beginning perhaps to give the audience a chance to absorb the nuances of the story, was excellently laid out as the program is unraveled layer after layer upon Steven’s each return to the original reality.

Of course, in action thrillers involving the government, the lines are always blurred between right and wrong, especially when government officials take out the “national security” card. People will find themselves sympathetic to the plight of Capt. Colter Stevens, who was robbed of his chance to die honorably to be plunged into the program because he was the only one whose brain synapses was compatible to the project’s specifications. The emotional anguish of being helplessly plunged into a mission with only snippets of information and being given the responsibility of saving millions of lives while faced with the uncertainty of what was to come…. Aside from the action, which proved to be merely secondary in this movie, I liked the way that relationships between Colter and Christina (Monica Monaghan), as well as Colter and Goodwin (Vera Farmiga), and lastly Colter and his father played out. And most of all, kudos to Jake who held the movie together, being the right part confused, angry, determined, and heroic at just the right moments.

I guess this movie is a sign that I should stop my moratorium on Gyllenhaal movies. 🙂 This movie is highly recommended.