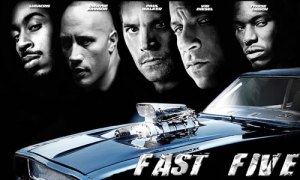 After the success of The Fast and The Furious, Vin Diesel and Paul Walker team up once again as Dom Toretto and Brian O’ Conner for the conclusion of FF saga. Rounding up the cast for this testosterone fueled guy movie are the strongest cast of supporting characters from their previous movies including Mia (Jordana Bewster), Vince (Matt Schultze), Han (Sung Kangt), Roman (Tyrese Gibson), Tej (Ludaris), Gisele (Gal Gadot) and the Mexican team of Leo (Tego Calderon)and Santos (Don Omar).

The movie starts off where the last one left off. Bryan and Mia round up a team to bust Dom from a prison bus on his way to a maximum security penitentiary. After they make it on America’s Most Wanted list, they go to Rio de Janeiro, Brazil to hide out with Vince, one their boys from the first movie. Vince offers them both a job stealing imported cars for the biggest drug dealer in Brazil, Reyes. Things go awry, as they always do, and the trio of Bryan, Mia and Dom, find themselves in possession of a list of locations of Reyes’s operations. As they are hunted by a special operations team led by Agent Hobbs (Dwayne Johnson) on the side of the good guys and hordes of guns for hire from the side drug dealers, Dom, who learned of the way Reyes has oppressed the people of Rio, decides to hit him where it hurts before they disappear to start their new lives. They form a team of trusted colleagues to stage a heist on $100 million worth of Reyes’s money to take him for everything he’s got.

The action scenes in this movie were just insane. People want to see awesome cars when they see this type of movie and the film delivered. Car chases? Check. Stunts? Check. Hand to hand combat? A major check.

The showdown between The Rock and Vin Diesel was epic. As was the chase on the roofs of Rio. I thought however, that the cinematographers would have framed it differently and moved the camera back a bit to show the amazing parkour that the cast probably trained for. Some of the shots were a bit too tight for my tastes so it got kind of a bit Bourne Supremacy in your face to me at that junction, with all the shaking. The same could be said for the Pacifier vs Tooth Fairy wrestling match. Diesel and Johnson were both really bulky guys and they could have used some breathing room to show their moves. Still, as I said, it was epic.

There was also a lot of ribbing and fun banter among the characters in the movie, making most of the scenes light and relaxing, even if they were dealing with a high pressure mission and they were being pursued from both sides. For this, credit goes to Tyrese Gibson’s Roman and Ludacris’s Tej. The two Mexican explosive experts were also fun to watch as they argued non stop in a foreign tongue like an old married couple.

Towards the middle, I got a bit confused because we found Dom orchestrating a heist. He seemed to be channeling his inner Charlie (Mark Wahlberg’s character in The Italian Job) and Danny Ocean and seemed to have an answer for everything, considering that his expertise was in carjacking and not robberies. I was surprised to see Han when he showed up for this movie because I knew for a fact that he got killed in Tokyo Drift. That was when my brother explained to me that sequentially, Tokyo Drift actually comes after Fast Five, so that explains his cryptic statement in the end saying: We’ll get there eventually (Tokyo). Another question was where they were getting the funds for their operation because they were as I recall, fugitives from the law. There was also an awkward scene where Hobbs’ convoy was ambushed by the drug dealers and his men were killed. There was this moment where Dwayne just laid there in slow motion, emoting as guns fired all around him. I understand that he wanted to make a statement with his acting but movies like these are just not the proper platform for award winning acting. It just threw me off a bit.

I liked the film because it was action packed and entertaining, but most especially it spoke of the ties among family and friends. It was sad not to have Letty (Michelle Rodriguez) in this last movie. She had great chemistry with Dom’s character and their relationship had a depth to it that audiences can relate to. The love interest that they brought for him in the end  of this movie fell a bit short in comparison. All in all, it was a stunning conclusion to the franchise, and it was not just one man who made it possible but an awesome supporting cast and great direction.