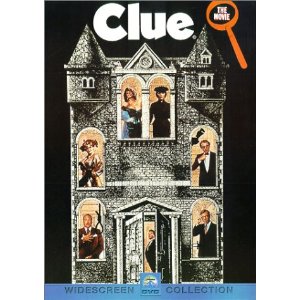 It’s been a while since the last Clue movie was released (1985). The film was based on the popular board game Cluedo, a murder mystery where players try to uncover the identity of the murderer and the weapon in which he/she has used to commit the crime. While according to reports, the movie, topbilled by Tim Curry as Wadsworth The Butler, tanked in the box office, the film has redeemed itself in later years in DVD sales and video rentals.

I, for one, thought that the first film was brilliant. I caught it on late night television while I was a kid and the movie stayed with me all through adulthood. It was the first time that I saw a movie with not one, not two but three alternate endings that were so well patched together than any one of them could have been plausible enough to end the story. I had no doubt that the writer was a whiz at Cluedo himself.

The movie starts out quite simple. A group of high profile guests are invited for dinner at a mansion by an unknown host to be blackmailed in exchange for keeping their darkest secrets. Like the board game, there is a Mrs. Peacock, a Miss Scarlet, a Mr. Green, a Professor Plum, a Mrs. White, and a Colonel Mustard. These are of course, code names assigned to them by their mysterious host in order to protect their true identities. There is also a Mr. Boddy, who is later revealed to have been the orchestrator of the gathering and the chief blackmailer, as well as his butler Wadsworth, who harbors a grudge against him for the death of his wife. As the night goes on, attendees of the dinner mysteriously fall like flies (including their tormentor Mr. Boddy) and they begin to suspect each other more and more with each death. The movie is not done in serious fashion but rather executed in a comedic old fashioned way, a stark contrast to the direness of the situation, and made the film light and generally entertaining for the viewers, therefore encouraging them to hazard their own guesses. The ending(s) are quite surprising and the big reveal(s) no less astounding, and one would be compelled to trace back steps to see what they have missed along the way. I guess, this might be a reason why the video and DVDs sold so well — because the videos has options to rewind over and over again for further investigation.

What the franchise holds for its 2013 reboot is beyond me. I personally am not enthusiastic about the remake because I think the original was already well done. Will the new one take on the serious route? Who will comprise the cast?  So far, Pirates of the Caribbean 1, 2 and 3 director Gore Verbinski has already signed on to helm the project, but aside from this, there is still no news about the remake. But perhaps, this would appeal to a new set of audience — ones who have not seen the classic. So, now I’ve decided to wait to be surprised, but until the film starts production, I will withhold further judgement.