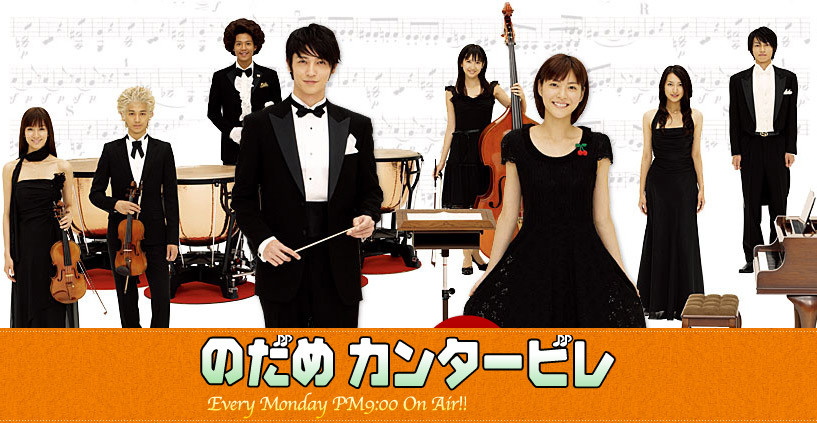 The conclusion to the Nodame Cantabile Live Action franchise entitled The Final Score was a movie released in two parts, one came out in 2009 and the second volume in 2010. It was a long wait for me but I finally saw it yesterday on the Japanese channel without subtitles. But because Nodame is my favorite Jdrama ever, I went with it to learn the conclusion to my much beloved series. By the way, the series was originally adopted from the hit comic book penned by Tomoko Ninomiya so be forewarned that there are a lot of comical and exaggerated scenes throughout the series.

The movie starts off where the two-part drama special left off. Shinichi Chiaki wins the Platini International Competition and becomes the conductor of the Le Marlet Orchestra, which is considered a step up from his S Orchestra (S-Oke) in Japan, but still needs much work in order to reach the same level as high profile orchestras in Europe. As Chiaki’s career takes off, Nodame is busy preparing for her graduation exam in music school. All seems to be going well with the odd couple, especially when Chiaki asks Nodame to play Ravel’s Bolero with his orchestra. Enthusiastic to debut in Chiaki’s concerto, Nodame practices day in and day out to meet her boyfriend’s expectations. Things suddenly take a turn for the worse when at the last minute, the solo is given to piano prodigy Son Rui. Crushed, Nodame turns to Maestro Franz Stresseman, who recognizes her genius and offers her a slot in his orchestra. In this installment, it is noticeable that the story takes a more mature turn and gives the characters more complicated obstacles, but it is no less fun and entertaining than its previous chapters.

I truly love Nodame mainly because the actors cast for their parts were able to adopt the characteristics of the manga into live action. Throughout the series, one could not help but fall in love with the quirky Megumi Noda (Juri Ueno), a weird, but childlike piano wonder who decides that she is in love with Chiaki after she finds him drunk and asleep on her doorstep. Before he knew it, Chiaki,  ( Hiroshi Tamaki) a disciplined and talented musician who dreams of becoming a conductor, finds himself enveloped in Nodame’s world, roped into her antics and thrown amid her group of friends who are just as wacky as she is. I like the chemistry between the two leads because when they are funny, they are absolutely hilarious and when they are serious, they are well and truly compelling. The supporting characters also performed their parts well — I mean this from the beginning episode until the last.

Back to the finale, I saw it in pure Japanese so I didn’t really get the specifics of the conversations, but I liked it because the acting was good enough to make me understand the gist of what was happening. I felt Megumi’s pain when Rui took her place and could just hit Chiaki for being insensitive to Megumi’s feelings, even dismissing her shaken confidence as he leaves her in the morning. Nodame has evolved somewhat with her dream of performing in an orchestra clearly in sight, by being more open to practicing and being less flighty. And while there was a a marked difference in Chiaki’s treatment of her, Chiaki remained generally unchanged, although a bit gentler and  more accepting of his feelings for Megumi. But, still a part of him is obviously in denial over his relationship with Nodame so his biggest hurdle in this movie, is his inner turmoil.

I would like to give credit to the team for establishing continuity in terms of cinematography and storyline as the filmmakers constantly referred to flashbacks from the 10 episode Jdrama and the two part special. There were also spots from the S Orchestra and Megumi’s music professors that tied the story together and reminded viewers of what transpired before. But my favorite part, as always, was the music. I am not learned in the classics but the pieces from Beethoven, Bach, Ravel, Chopin and other musical legends served the story well in terms of emphasizing the general mood of the moment — Chiaki’s contemplation, Megumi’s confusion, and even Stresseman’s occasional sparks of sentimentality. The music truly has a life of its own.

While I was still uneasy over Chiaki’s habitual abuse of Megumi (they were only following the trend in the anime, after all), I did appreciate his final gesture and his absolute surrender to his true feelings for her when he was faced with the reality that he could lose her. I would have wanted Megumi to clock him one, just to get even for his denseness, but that would have been contrary to her personality. 🙂

All in all, it was a perfect ending, and well worth the wait after all these two have been through. Even without understanding half of what was being said, I was moved by the music and I was touched by the story. Nodame’s finale made me laugh, and it made me cry, it made me miss the quirky little miss, enough to take out my DVD and watch her again from the beginning. Just imagine what it would have been like if I saw the finale with subtitles. 🙂