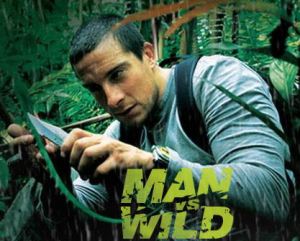 A good friend recommended this show to me yesterday, and showed me some of episodes of this Discovery Channel series/survival show featuring English adventurer Bear Grylls (aka Edward Michael Grylls), who gained fame for being the youngest Brit to summit Mt. Everest at the age of 23. Grylls, who is now 36 years old, has since added many more accomplishments under his belt. The series takes Bear in different locations (deserts, jungles etc.) and basically shows him trying to survive the wild with only his wits and two or three small tools to do so.

The episode I saw yesterday took Bear to the Moab Desert in Utah, one of the most arid areas in the US, armed only with a switchblade, a canteen of water and I think, a tinder. He illustrated how easily a hiker could lose his bearings and die from the extreme heat of the dessert and the pitfalls that face hikers and canyoneers who are not careful while navigating the treacherous lands.

Throughout the episode, Grylls demonstrated some practical survival techniques when faced with imminent heatstroke. Some of them involved making a makeshift turban to wrap around his head to ward off direct contact with the sun, some involving quite disgusting methods of cooling oneself off (I guess one can’t afford to be squeamish when faced with the possibility of death), searching for and filtering water, getting out of a rock and a hard place, and even — my favorite, escaping from quicksand.

While not being a fan of the great outdoors, I can’t help but appreciate nature’s wonders throughout the show. However, if I were to be asked if I would embark on half the things Bear did during his adventure, the answer would probably be, not a chance! It’s great to learn tips from him though, just in case I do find myself stuck in a similar situation or if disaster strikes.

What I appreciated about the show is the practicality of Bear’s methods — his manner of presenting a situation and what one needs to do to overcome a particular obstacle. He does not exaggerate the danger, but rather cites real life examples of mishaps that happened to tourists and even professional adventurers who failed to protect themselves against the pitfalls of the wild. He later on demonstrates the how to that he has just cited to show that it is achievable and effective.

Man vs. Wild is a great show, in my opinion. It’s informative, entertaining and very cool, appealing to one’s sense of adventure if one is only willing to unleash it. 🙂

To check out Bear’s other adventures, here’s a link to the Discovery Channel’s official site for the show.