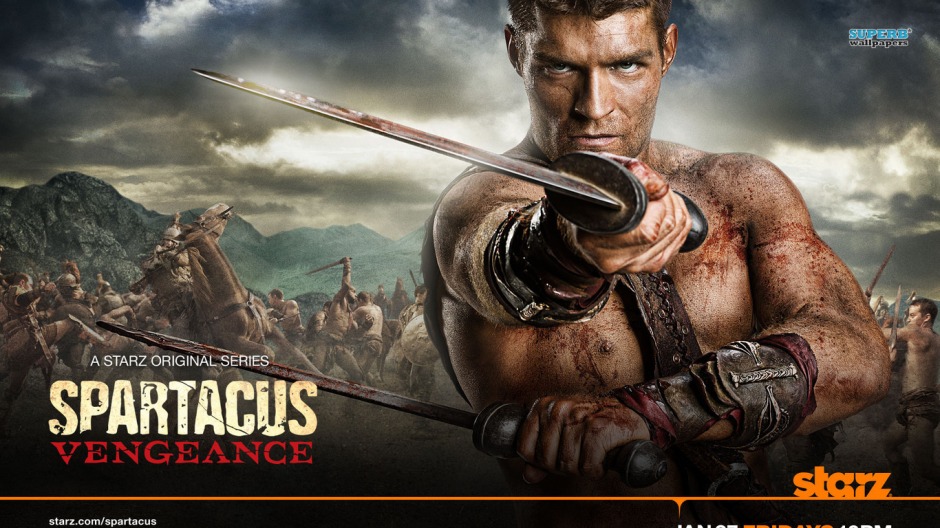 After Andy Whitfield, the original actor who played Spartacus, passed away last year due to non Hodgkin lymphoma, I was hesitant to check out the second season of the series entitled Spartacus: Vengeance. I felt that Andy was the best possible actor to play the part and that no one could embody the spirit of the Thracian champion other than him. But being a fan of the series, I eventually gave it a shot to see how Australian actor Liam McIntyre, his replacement, would fare.

The pilot episode takes place several weeks after the massacre at the House of Batiatus after the gladiators stage an uprising to avenge the death Spartacus’s wife under Batiatus’s orders. The men, along with the slaves  have liberated themselves from the ludus but are tagged as fugitives and hunted down by the army of  Seppius, a young nobleman who seeks fame and glory by pursuing the former gladiators, to no avail. As a result,  Gaius Glaber, who has recently been elevated as Praetor, is sent to return to Capua to ensure the destruction of Batiatus’s former gladiators.

The plot has similar premise as the first one, only this time, it is Crixus who wants to find his mate Naevea.  But as the title suggests, the story runs deeper as the gladiators try to take down the very foundations of Roman politics in return for all their suffering at the hands of its officials. The first episode alone has set the stage for a lot of fighting not only against the Romans but also within the group as going underground takes its toll on the fugitives and tensions run high among the men.

As with the previous seasons, the episode is not short of action, sex and a lot of blood. The story is as it was, filled with plots, counterplots and scheming from Rome’s elite and powerful whose majestic abodes run quite contrary to the plight of Spartacus and his group, who have taken refuge underneath the city sewers.

The first episode bore many familiar faces. Docture, although he has not joined the other men, still looks out for the group by lurking around the city and giving them fair warning; Crixus, Ilythia and her husband Gaius, Mira, and Lucrecia, who surpringly survived the massacre. There were many new faces, especially on the part of the Romans as most of the original plotters have been killed.

However, it felt like a different series despite the familiar setting, familiar cast and brilliant writing. Obviously, it was because there was no Andy Whitfield to take the part of Spartacus. Liam McIntyre did a pretty decent job, but I felt that he was too young to play the part of the warrior that is Spartacus, a character who has been through hell and back in the past season. I felt that the team could have fared better with a guy who was much older — the same age range perhaps as Crixus so that it might not seem too awkward for him to take command or advice from Spartacus. I thought that the chemistry with the first team was a lot better and losing Andy seemed to tip the balance somewhat. The lack of a truly vile villain in the likes of Lentulus Batiatus or Solonius has also set back the production some.

The cinematography, editing and special effects have always been top notch and this did not change with the return of the Starz series. Spartacus wrote the book on the proper use of slow motion to emphasize drama and damage and the team managed to break out their bread and butter with every opportunity.

I read somewhere that Gannicus, the freed gladiator from the prequel will make an appearance in future episodes. I wish for this to be true because he brought a lot to the franchise when he starred in Spartacus: Gods of the Arena (six episode prequel) alongside Crixus and Docturi. I think that losing its main actor is a major blow to the series but more than that, starting from scratch (as most of the cast was wiped out at the end of the last season) is a challenge that the team will be hard pressed to make up for. If the series manages to make it through this season, I think that it would be best to bow out gracefully rather than stretch out the franchise with one too few ingredients that made it such a success.

Here’s an earlier poll I launched to see how Liam measures up in his new role. Click here to check it out.