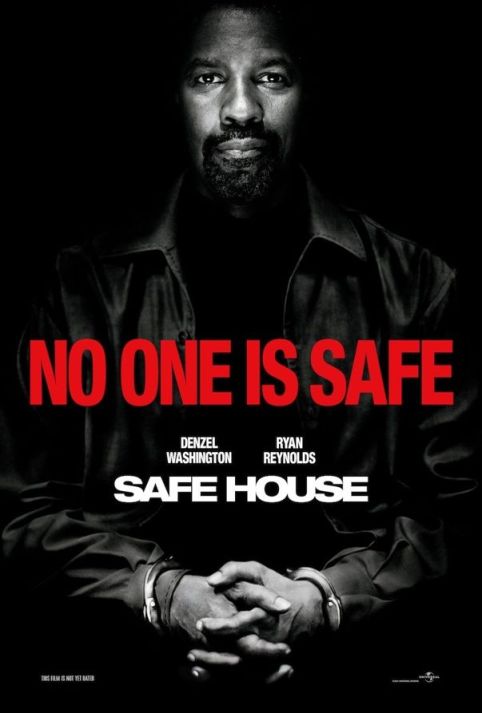 The poster of Safe House alone got me intrigued. It had Denzel Washington in black and white, simply sitting there with a deadpan expression on his face, and then there’s a blaring tagline across the poster that read in bold red: No one is safe. And then I check out the trailer and see Ryan Reynolds, whose performance in Buried totally made me a fan of his acting, and I was sold.

Safe House is a story about rogue CIA agent Tobin Frost (Washington) who’s been trading the agency’s secrets for the past nine years. After evading the agency for close to a decade, he suddenly turns up at the US Embassy in Cape Town, South Africa for reasons unknown to the CIA. Initially unsure of what to do, the agency decides to take Frost to a safehouse manned by case officer Matt Weston,  an agent itching to get out of his assignment in favor of something more exciting. However, moments after the extraction team arrives at the safehouse, the location is compromised and the agents tasked to transport Frost are wiped out by heavily armed men, who have been chasing Frost to get a valuable file containing secrets that would incriminate the agency, along with its top officials in a web of corruption so complicated that it threatens the reputation of the CIA. Confused and overwhelmed, Weston escapes with Frost, an expert manipulator and career veteran, to await orders from the higher ups but he begins to question his choices when Frost starts to mess with his head.

Safe House was a bit of a slow starter. The first ten minutes dealt mainly with establishing the story and the differences between the two leads — one is a rookie who wants to prove himself, and one, a veteran whose years with the CIA has disillusioned him and pushed him to betray the agency. However, the movie is far from lacking in action of any kind as it boasts of great car chases fueled by a lot of excellent driving and not too much explosions as is custom with movies nowadays, a lot of mano y mano  beat downs, pursuits on foot and a lot more. Most of the focus of the movie was on Washington and Reynolds and the two had great chemistry. Washington’s veteran was noncholant and unfazed even in the face of immediate danger and Reynolds played a very smart rookie, whose emotions were clearly expressed with each choice that he had to make. The contrast in their personalities may not have made for a touching relationship but served to illustrate the difference between one who remains innocent to the ways of the agency and one who has seen one battle too many. The pacing was kind of a roller coaster too, because filmmakers sandwiched the discussions about the main plot in between chases and gunfights, so the audience would have room to breathe even for a while before the two are chased by yet another group and get into even deeper trouble.

My only complaint perhaps, was that during the scenes where Frost and Weston were having heart to heart talks, they mostly whispered and mumbled so I didn’t understand much of what was being said, which kinda sucks especially because they were discussing something vital about the file that everybody wanted.

Safe House did not have an overly original plot, nor did it have a super shocking twist in the end and by all means, it should have been an unremarkable conspiracy/action movie. But it wasn’t, mainly because the acting element elevated the quality of the movie,  and made the audiences pay attention to what was happening and made them sympathize with the plight of the leads. I understand that the rookie/veteran angle has been used many times over but in this case, it remains effective as the actors cast for the part are able to deliver a different take on the formula.

While I would not say that Safe House would shoot its way to becoming one of my favorite films, I would have to say that all in all, it was a good movie, worth spending 117 minutes to see, and a little extra to write about.