Now that the Blouis ship has sailed, Gossip Girl fans such as myself are now left with only two leading men in which to choose who the perfect match for the Queen/ Princess B would be.

There is no doubt that my favorite character in the franchise (books and series) is Blair Waldorf and I believe that despite her constant scheming and determination to live a fairy tale life, she really means well. She’s smart, she’s sassy, she’s sophisticated, and even when she falls flat on her face sometimes, she has a strong core that helps her weather out even the most salacious of scandals. So it comes as no surprise that I am truly invested in which storyline she should pursue to get her the happily ever after I believe she deserves. Without further ado, here comes the faceoff.

I must admit that there were times when I fell off this ship because of the atrocious things that the Prince of Darkness has committed against our Princess, selling her off to Jack was, for me the most heinous crime of all but somehow, he manages to bounce back from it by doing something awfully selfless that viewers immediately forgive him his offenses. Aside from this, CHAIR is a very intense pairing that runs deep enough that viewers draw from this well of infinite possibilities even when the situations are too far out to even contemplate in real life.

1. CHAIR is love: Chuck and Blair have one strong thing going for them and this is that they love each other. This love varies in degrees depending on the status of their relationship but these two have never wanted for making sacrifices for the sake of the other.

2. CHAIR has history: Chuck and Blair came out of the blue. The books did not have the Chair pairing for the first 12 books in the series and only made up for this in the last book (after high school). It was a brilliant turn of events in the first season that led to this complicated pairing of brilliance and deviousness that has kept viewers at the edge of their seats until now.

3. CHAIR has chemistry: When Chuck and Blair are together, they sizzle. Chuck smolders with his bedroom voice and stare, while Blair melts like butter in his hands, all her resolve gone after a night in his company. Deep down, these two are magnetic. They are drawn together time and again, even when they try to stay away from each other.

4. CHAIR has genuine acceptance: Chuck and Blair know each other well enough to think like the same person. They enjoy concocting intricate plots to save their friends and punish their enemies and they are aware of the darkness that is part of the other enough to love  without conditions.

1. CHAIR is too alike: Chuck and Blair are like two smoking peas in a pod. They think similarly and act similarly in most occasions and have even joined forces in more than one instance. They support each other unconditionally and this strength actually works as a weakness because they do not have check and balance. When they are going downhill, they go together.

2. CHAIR is a neverending loop: Chuck and Blair have been through a lot. However, at the core of each make up and break up is the same thing. Trust. Business. While Chuck understands now that Blair is more important than any of his material possessions, his status and his determination not to end up like his father and his uncle are strong points that keep him away from his lady love. 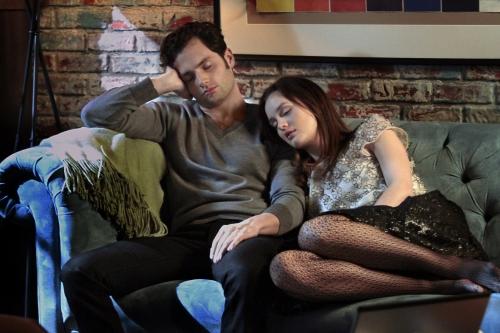 I was pleasantly surprised when this pairing developed in the last season because Dan and Blair have been on the opposite sides of the fence ever since the first season. If they have not been forced together by circumstance, I didn’t even think that they stood a chance. However, when producers and writers experimented on the relationship, I was all for it because these two are actually kind of cute together. And really, I thought that DAIR had great potential as an end game couple. Especially with Chuck keeping it interesting in the background, this storyline has a long way to go.

1. DAIR has honesty: With the issue of trust plaguing the DAIR ship like termites on wood, Dan and Blair have been nothing but real with each other since the get go (except with Dan hiding his true feelings of Blair, but that’s out now. Besides, Blair is a bit dense when it comes to Dan’s subtle hints of affection). Dan can be cynical at times and voice out his opinions even if it clashes against Blair’s and Blair has been nothing but open to Dan about her displeasure at his upbringing, his clothes, opinions, etc. and despite that…

2. DAIR also has acceptance: Dan has been friends (?) with Blair long enough to know her for the ambitious and scheming *itch she can be, but he was also perceptive enough to understand what motivated Blair to become who she was and holds no grudge against her imperfections. Blair too, has been tolerant of Dan’s cynical views about her ‘people’ and recognizes (albeit a bit too recently) his good intentions and loyalty to her as a person and possible girlfriend.

3. DAIR is fresh. Dan and Blair has a history too but not in the romantic front and this is an advantage for the duo because Chair has had several seasons already under their belt. The DAIR pairing is fresh and anticipated by the viewers like what will happen next to this cat and mouse team? Will they work?

4. DAIR has chemistry: Dan and Blair look good together and they’re very comfortable with each other. They interact well together, in both romantic and friendly contexts. They have chemistry but it isn’t all based on lust. They hang out together, watch movies together, are there for each other (Well, Dan is but Blair is getting the hang of it) and their differences provide them banter that Chair does not have. They are also both smart and like the same things and can do a lot more than kiss and plot.

1. DAIR is competing with CHAIR: The downside to this experimental pairing is that it is competing with a very strong ship – Chair, that has a very solid fanbase. This early, some viewers have already shot down DAIR because they believe that CHAIR is endgame.

2. DAIR may be boring: While the budding relationship is still new and therefore is still faced with challenges, the question is whether or not Dan’s simple living may be enough for Blair’s fast paced Upper East Side ways? Will the Queen B be content with a more mature, more artistic gentleman than one who wields enough power and money to give her the life she’s always dreamed of? Now, this argument is still a long way off (but I think Dair has enough substance to make it work) so we’ll never know until maybe the next season?

I’ve tried to keep it balanced and fair but what do you think? Vote in the poll and feel free to sound off your opinions. Just refrain from attacking each other even if you feel strongly about your ship. 🙂