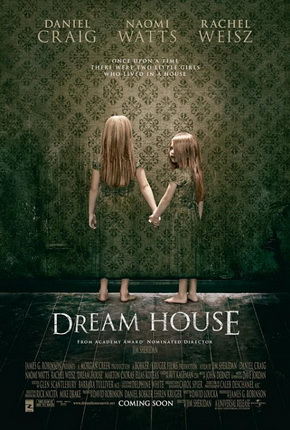 After I watched Wrath of the Titans last week, I still had some time to kill in my hands before I had to go somewhere else so I decided to check out this movie (SM Cinemas devotes one theater to feature older movies at a discounted rate of P25). I thought it had some potential due to the presence of Hollywood A-listers Daniel Craig, Rachel Weisz (now Mr. and Mrs. Craig), and Naomi Watts, plus the intriguing poster, so I dived in.

Aside from my annoyance at the number of people who treated the moviehouse like a zoo (chattering and yelling for no particular reason), I left the cinema reeling with confusion as to what just happened after I took in the 92 minute psychological thriller.

The movie starts off with successful book editor Will Atenton (Craig) quitting his job at the publishing house to finally focus on writing his own book in the new home he and his family moved into. But the dream house that he wanted to build becomes a nightmare when his wife Libby (Weisz) and his two little girls begin to sense somebody watching the house and threatening the family’s peace. When they discover that the former occupants of their house was massacred with only the father named Peter Ward surviving, they begin to panic, especially when they feel like the entire town is keeping mum about what truly happened.

As a psychological thriller that follows many others with deeper and more complicated twists, my problem with Dream House was its scattered storytelling and the lack of establishing sequences that led to the big reveal. Well, at least I thought it was the big reveal. But as it turns out, the revelation in the middle was a lead up to the one towards the end which should have been good by all standards, except for the fact that the first twist was so abruptly delivered that audiences get derailed, making the second twist seem like a predictable afterthought.

Acting wise, the cast was top notch but there is only so much good acting can accomplish if the material is as fragmented as this one. The kids who played the Atenton children Claire and Taylor Geare (Hmm, are they sisters?) were absolutely adorable leading to a lot of awww moments throughout the movie.

Dream House,  in wanting to prove that it is one step ahead of the pack, left too many openings unanswered like what the true relationship between Ana (Watts) and Will was (Ana seemed a little too concerned about him to be just a neighbor) and how in the heck Will got his job without the firm checking into his history. This, I attribute again to the loose storytelling that was the premise of the entire film.

Anyhow, Dream House was a good attempt to raise the level of the genre but sadly, the execution just wasn’t there. It leaves audiences confused and mystified instead of awed and amazed by its supposed brilliance.