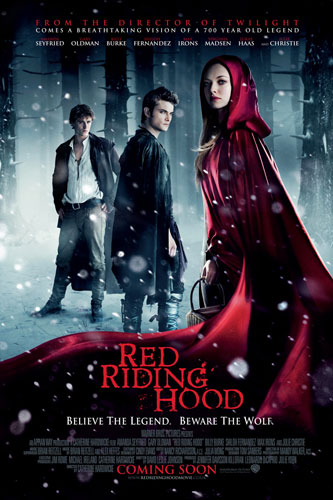 As I may have mentioned in some of my reviews, I am a sucker for fairy tales and its various forms and reinventions. I didn’t get to see Red Riding Hood in the movies last year but I still managed to see it on video and frankly, I’m not sure if I loved the modern take of this fairy tale classic originally told by Charles Perrault and the Brothers Grimm.

Amanda Seyfried (Mamma Mia, Jennifer’s Body) stars in this fantasy thriller as Valerie, a girl living in remote village deep within the forest that is plagued by wolf attacks. The villagers, in order to protect themselves, sacrifice their livestock every full moon and stay indoors. Twenty years since its last human attack, the wolf takes the life of Valerie’s sister and the villagers go into a panic. The enraged townsfolk set off to hunt the wolf and kill it, not knowing that the wolf actually takes on a human form and lives among them in the village. Valerie, who is caught in the middle of a love triangle with her childhood friend and the love of her life Peter (Shiloh Fernandez) and her betrothed Henry (Max Irons) is the only one who understands the wolf’s message and is left confused and unsure as to who the beast truly is.

Catherine Hardwicke, director of the first movie in the Twilight saga, takes on the reins for this movie, which cinematography wise could be the twin of tween phenomenon. As is custom, there are two cute guys fighting for the favor of one beauty and the plot thickens with the revelation of secret after secret, and with more and more suspects coming to play with each scene.

I actually liked the story of Red Riding Hood, which was based on the novel by Sarah Blakley-Cartwright, and its general sense of mystery. I liked the underlying intrigue that unfolds layer after layer as the story progresses and how the reveal in the end still holds a bit of a shock value but still made total sense. Hardwicke plays the love triangle angle like a pro, perhaps from practice from the Twilight films but there were times in the movie where the scenes drag out too much. Still, the number of potential suspects worked in favor of the film as it kept audiences interested in the the film for the better part of it, so it was a bit of a roller coaster ride for the most part.

Acting wise, I would have to say that great actors such as Gary Oldman and Lukas Haas were underutilized in this movie. I was unsure of how to receive Oldman as wolf killer/priest Father Solomon as he did no more that make announcements to the crowd and scare them silly. Haas also did not have any great moments as he was relegated into a supporting role that does nothing else but cower and kowtow to the whims of Oldman’s character. As for Billy Burke, I liked him loads better as Bella’s rough around the edges dad rather than Valerie’s father, the woodcutter, who seemed never to take a bath throughout the duration of the film. The leads were passable enough but surely their performances will not earn them any acting awards., not in the near future yet.

All in all, I kind of liked Red Riding Hood. I didn’t think it was awesome but it was good enough to spend an hour and 20 minutes to watch without regrets. Visually, it was a treat, as for the rest, it had potential.

I’m looking forward to seeing more fairy tale re-tellings this year. I for one, am excited about Snow White and the Huntsman (because of Chris Hemsworth) and Jack the Giant Killer with Nicholas Hoult, whom I adored in Skins.