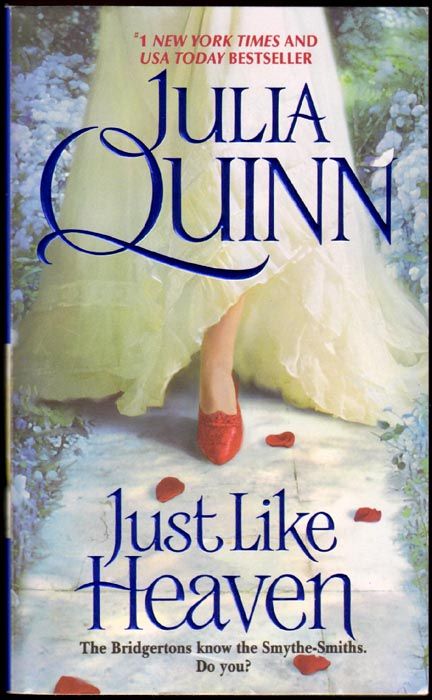 I haven’t read a book for quite a while now, and as a result, my TBR pile is growing tall. So since today is a Sunday, I decided to pick one and start off with a light historical romance by one of my favorite authors on the genre — Julia Quinn.

Just Like Heaven is a new series from Quinn which features secondary characters from the Bridgerton series — the Smith-Smythes, a well meaning highborne family who are blissfully unaware (at least the older ones are) of their lack of musical skills thus compelling them to continue with the tradition of staging an annual musicale. The event features a quartet of unmarried ladies from the brood performing/massacring Mozart, and could be considered torture by most members of the ton. However, this is an activity which they endure politely because the family’s status in society. Honoria Smith-Smythe is a member of the quartet and knows that she plays the violin terribly. She continues to live out the tradition because her family matters a great deal to her. She is also on her third season and is desperate to find a husband, if only to escape the dread of her once happy home following a scandal that has forced her brother Daniel to flee the country. Marcus Holroyd, the Earl of Chatteridge, on the other hand, is Daniel”s best friend, who has secretly been charged with keeping an eye on Honoria while her brother is away. Because of an accident (which she thinks is her doing), Honoria is compelled but to care for the injured earl in his country home while he struggles with a deadly illness. While going through the ordeal, the two find themselves  bonded with shared memories, a love for desserts and a new attraction that is vaguely unfamiliar and changes the whole dynamics of their decades-old relationship.

Unlike other Julia Quinn novels that I have read, Just Like Heaven is relatively simple and revolves around the discovery of two people that despite their years of knowing each other, there is still a possibility of discovery and the blossoming of new feelings that are strengthened by mutual trust and experiences. Its really nothing new as this subject (best friend falls for sister) has been utilized quite a lot of times by many different authors before. The plot remains effective because it is releatable to the readers. Heck, I, for one have devoured at least a dozen titles with the same plot but somehow, it has never quite gotten as old as one would expect. I could probably stand a few more.

What makes Just Like Heaven a good read is the writing. Julia Quinn is a great storyteller and while I must admit there were some scenes and dialogues in the book that I found repetitive, she made them seem humorous and witty that one has no other alternative but to trudge on and see what happens next.

In my opinion, the Smith Smythes are an adorable lot, but they (at least from this book) lack the same depth of character Julia Quinn’s Bridgertons (my favorite being Colin). Perhaps this book, being the first of this new series, is intended as a warm up to the sequels so I’m not too worried as yet. And because the Bridgertons and the Greys and the Bevelstokes exist in one universe, there are also some familiar scenes from previous books revisited in a different point of view so the connection among the novels is quite something to look forward to for the author’s fans.

All in all, I enjoyed Just Like Heaven. It wasn’t overly heavy or complicated but it was well written and entertaining — a great way to inspire me to return to my pile to take on a different book.