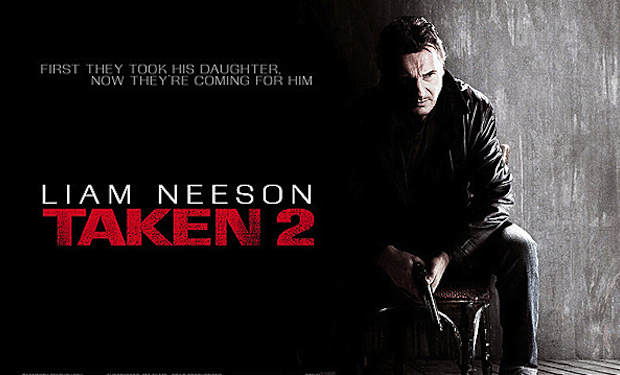 After saving his daughter Kim (Maggie Grace) from a prostitution syndicate in the first installment of this action packed franchise, retired CIA agent Bryan Mills (Liam Neeson) is now being hunted by the family members of the men he killed in his rescue mission, and they will stop at nothing until they exact revenge.

After Bryan Mills,  the man “who has a special set of skills”  tracks down and dismantles the syndicate operating a prostitution ring that preys on American girls in his quest to save his daughter, the syndicate’s leader, and incidentally, the father of Marko from Tropoje (the dude who kidnapped his daughter and had the gall to mock Bryan Mills on the phone),  vows on his son’s grave that he will kill Bryan and make him suffer as he had. He gets his opportunity when Bryan takes a job in Istanbul and his ex-wife (who is now suffering from marriage woes with her second husband), and daughter come to visit him to spend some quality time together. History repeats itself as Bryan and his wife are taken captive and Kim is pursued by gangsters.

When I first heard that there was going to be a sequel, the instinct to watch it became automatic, mainly because the first one was so good. The action was so subtle yet so seamless, especially for a man with Neeson’s age that every scene just blows the audiences away. This even before the fact that Liam is an excellent actor.

The installment, which is pretty much a continuation of the first, is no less awesome. The car chases and the sheer intelligence of Bryan’s techniques in getting himself and his family out of a jam, even unarmed is totally astounding, and he does it with such ease and calm that one really would wonder if he is a Jedi in real life (He played Qui gon Gin in Star Wars: The Phantom Menace). And the father and daughter chemistry between Liam and Maggie — magic. One would literally feel how much Bryan loves his daughter with every inflection and with every nuance. His overprotectiveness is quite hilarious but the emotion behind it is truly remarkable.

However, I felt that Taken 2 was less intense than the first one because here, Bryan’s attention is split between keeping his daughter safe and rescuing his wife, whereas in the first, his concentration was solely devoted to tracking (and killing) the guys who took his little girl. Honestly, I am not a big fan of Leonore’s (Famke Janssen) character. I still have not forgiven her for the way she treated Bryan in Taken 1, shoving her husband’s wealth in Bryan’s face, and bullying him into letting Kim go to Europe against her father’s wishes which got them all in trouble in the first place. I really didn’t want her saved and I was rooting for Bryan only because I wanted him to win over the bad guys and not because I wanted the bitchy ex saved. Maggie Grace was awesome in this movie and her character has truly grown. From a victim in the first movie, she is now an empowered woman, very much her father’s daughter, showing courage in the face of danger to save the ones she loves. She was driving that cab like she was one of the girls from Fast and the Furious.

All in all, great work from the actors and writer Luc Besson and director Olivier Megaton who also collaborated on Columbiana. There might be a next installment but if the story is not solid, I don’t think that producers should ruin this franchise by anything sub-par. If they kill the wife, I just might be the first one in the cinema to see it, but that’s just me.