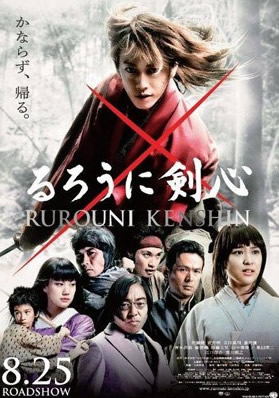 As a fan of the Japanese anime, I was one of the many who was overjoyed when it was announced that finally, a studio has taken on the task of bringing this hit manga/television series to the big screen in live action. Along with my co-workers who also grew up with this anime, we trooped to the cinema to see how the live action of Battousai the Slasher fared with his animated counterpart.

Rurouni Kenshin basically covered the opium arc of the anime, where the origins of the legendary assassin Samurai X or Battousai the Slasher was revealed. The story takes place ten years after the war during the early years of the Meiji era, or the new age in Japan’s history, where the legendary swordsman was nowhere to be found. Unknownst to them, the Slasher walks among them by the name of Kenshin Himura, the wanderer who helps the people of Japan recover from the spoils of war, defending the helpless in the Japanese countryside. When he travels to Tokyo, he meets a young woman named Kaoru Kamiya of the Kamiya dojo, who is out to seek out a man who has been executing people as Battousai, and is using the Kamiya style of fighting to hurt people. But the fake Battousai is just the tip of the iceberg as it is found out that he works for a rich businessman engaged in the illegal trade of Spiderweb, a new form of opium that is being distributed in the streets of Japan.

Personally, I admire Japanese adaptations of manga and anime. And the outcome for Rurouni Kenshin will be no exception for fans of the franchise. Takerou Sato (Kamen Rider Den-O, Mei chan’s Butler) was the perfect guy to play Kenshin Himura. He was able to depict the seriousness of the Slasher’s background yet he was also able to pull off the goofiness of the character in select moments of the film. At first, when I saw the poster, I was up in arms over the dude whom they chose to play Sanosuke because he looked nowhere similar to the anime character at all. But Munetaka Aoki proved me wrong as he quickly became one of my favorite characters in the entire movie, providing comic relief and personality traits that is identifiable with Kenshin’s best friend and right hand man. The dude seriously cracked me up. I was a tad disappointed over way the movie presented Kaoru, who was supposed to be one of the main characters of the anime. In the anime, Kaoru was feisty and spunky but save for a few minutes into the film, the live action counterpart seemed almost too whiny and depressing without the spark that led me to cheer on the Kenshin/ Kaoru love team from the beginning of the series. Saito was awesome, not needing to say much to make an impact.

As for the overall feel of the film, I should say that the filmmakers did a great job in staying faithful to the story, save for a few deviations. The problem was, in staying true to the episodic nature of the source material, the establishment of the story seemed to drag on for ages. I think that the earlier parts of the movie could have benefitted from some editing, and filmmakers could have better used this time in fleshing out the kickass samurai action and swordfighting stunts, which were really the main highlights of the movie. The thing was, perhaps in considering the younger audiences in their presentation, the filmmakers also took a step back in their depiction of violence on the big screen and sanitized their presentation of the grittier action sequences. Too bad, because Grindhouse approach would have upped the coolness quota of the entire flick and complemented the dramatic aspects of the film. But that’s just me.

All in all, I thought that Rurouni Kenshin: Live Action would please a lot of the fans, myself included.The filmmakers did a great job in focusing on one storyline and telling a story that could possibly spawn a sequel or end the live action then and there. I just wished it was a bit tighter, and shorter than 2 hours and 15 minutes.