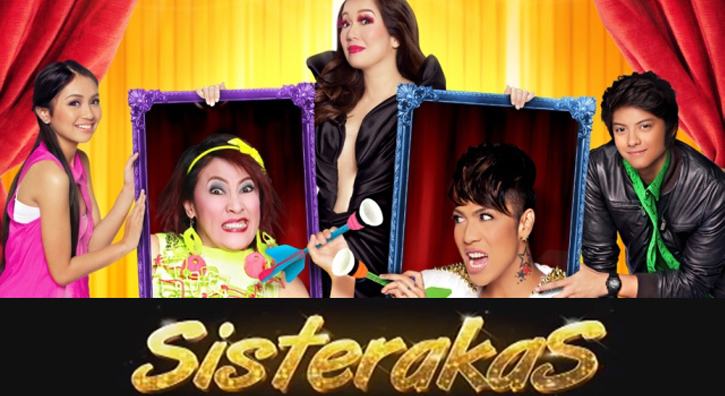 The title alone doesn’t make any sense, and the movie was obviously an attempt to patch comedy skits and parodies together to form a collection of gags that would fill an entire two hours of mindless fun featuring three of Star Cinema’s biggest stars. Surprisingly enough, this, coupled with a ridiculously flimsy plot, worked.

Sisterakas is the story of half siblings Totoy/Bernice (Vice Ganda) and Bernadette/Detty (Ai Ai delas Alas) who were separated when they were young because of a rift between their mothers that rendered Totoy’s mother an invalid. Fueled by his mother’s rage, Totoy vowed to exact revenge from his sister’s family and found the chance when, decades after, Detty applies for a position as Totoy’s (now a successful fashion company owner) executive assistant. During this time, Totoy devises various ways to torture his sister while his rival COO Roselle Hermoso (Kris Aquino) seeks to  pirate Detty to work for her company.

The movie had a really shallow plot. It didn’t use much of the budget on sets and special effects. I have no doubt that most of the budget for the movie was spent on the talent fees of the three major stars but it was well worth every penny. The movie was hilarious. The over the top costumes coupled with ridiculous parodies of scenes from other movies patched together to spawn new gags and new jokes are truly testaments to the comedic skill of Ai Ai and Vice Ganda. Their timing was flawless and each scene causes ripples of mirth to flow among the audiences. Both actors had their own style of comedy but Sisterakas was able to merge these styles for them to complement each other through a one of a kind script that does not try to hard to be funny. It just was. Period. Kudos to the writers and director Wenn Deramas (Tanging Ina)  for this.

Kris Aquino is really a better host than she is an actress but kudos to her for trying her hand at comedy. Her approach was mostly screamy (She is the country’s horror queen for a reason) but at least she was trying to be funny and this obvious effort is perhaps what made her portrayal of the flamboyant Roselle effective.

But what really made the movie work was perhaps the general sense  of abandon among the cast, not thinking of their own celebrity and poking fun at their own lives just to show the audiences a good time.

All in all, Sisterakas really made no sense, but it was awesome. It was ridiculous, it was funny, it was entertaining. And sometimes, that’s all a movie needs to be. If this film snatches the top rank from yearly blockbuster Enteng Kabisote, I would not be surprised.