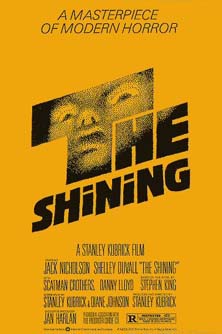 Stephen King’s The Shining was first adapted into film in the year that I was born (1980) by director Stanley Kubrick, who is best known for disturbing psychological thrillers like The Clockwork Orange. I’ve had the video of this movie for quite sometime now, as with the book but I wanted to read it first before checking it out. But now that the book sequel is about to be released, I figured I should probably get a head start and see this Jack Nicholson starrer first before fans of the original drop references to the Overlook Hotel left and right and spoil the experience for me.

Jack Torrance (Jack Nicholson), a former teacher turned writer who is going through a rough patch in his career accepts a job as caretaker of the Overlook Hotel, a luxurious hotel located atop the Colorado mountains for the five month winter break in which the hotel stops operations.  Jack sees the job as an opportunity for him to concentrate on his writing and at the same time bond with his family, after an accident with his son Danny, a boy who has a special ability to see the past and the future (an ability called The Shining) and communicate with others with a similar gift — causes a rift in their relationship. But what seemed to be an originally ideal scenario for the Torrance family suddenly becomes deadly as Jack is inexplicably drawn to the hotel and refuses to leave, even as spirits trapped inside it influence him into harming his family.

For a movie done in the 1980s, The Shining, up to this day holds up as a very creepy thriller, owing perhaps to the acting chops of its lead Jack Nicholson, whose portrayal of a man who is slowly losing his grip on reality is not only convincing but spot on. His gradual change into a rather sensible man into a madman possessed by his love for the hotel was very remarkable, even while hints were left at the beginning of the film with regard to the direction that his character was about to take. Shelley Duvall played her role as the meek wife Wendy was at times annoying due to her protracted moments of panic but I was thinking that I might not be too effective if placed in the same situation. The kid who played Danny (Danny Lloyd) was so adorable and one can’t help but sympathize with the kid. My favorite scenes of him was him driving his tricycle around the hotel. He just seemed so small and helpless inside a gigantic location surrounded by evil.

All in all, The Shining took a bit long in establishing the terror but did not fail in providing a sense of eeriness as almost each scene is accompanied by  ominous sounding scoring. Cinematography wise,  it did a great job in showing the contrast between the family’s isolation and the hugeness of the hotel which works in favor of the horror aspect of the movie. At the end of the day, there are still questions that I still need answered after seeing the movie and perhaps, this is a perfect opportunity to read the book.