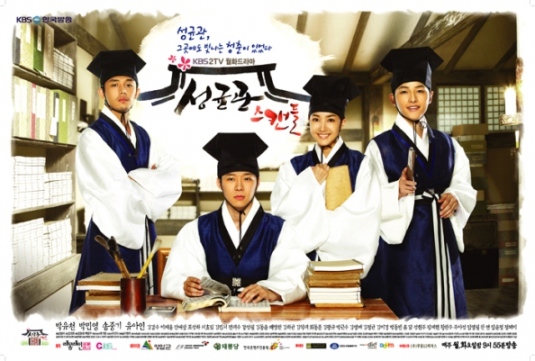 After my family trip to Seoul, I found it hard to let go of the city that has been so good to me with the friendly people, the cool air, and the excellent shopping that when I got back, I wanted immediately to catch up on my Korean dramas. I still had a couple on my TBW pile and immediately, I zeroed in on the Sunkyungkwan Scandal starring Park Yoo chun and Park Min young. I wanted to see Yoo chun’s Rooftop Prince (which I believe was more popular but a friend spoiled the ending for me so I decided to go with Scandal) but as it turned out, I couldn’t be happier with my choice.

Kim Yoon Hee (Park Min young) is a girl burdened by having to provide for her mother and ailing brother when her father passed away at an early age. In order to do so, she assumes her brother’s identity to work at the bookstore transcribing old books and making study guides for Sunkyungkwan university scholars, sons of noblemen who will soon take positions as government officials. But when their landlord, the Minister of War pressures the family to pay their debt worth 100 nyang or face eviction, Yoon Hee becomes desperate and she takes on the offer to become a substitute exam taker at Sunkyungkwan. A case of mistaken identity lands her face to face with Left Minister’s only son, the uptight, bookish and friendless Lee Soon Joon (Park Yoo Chun), who takes a special interest in her talents and forces her to take the exam and become a scholar herself.

I finished the entire series in a total of one day and two nights because I was just so engaged with this series. The story was pretty generic, girl disguises herself as a boy to get better opportunities, gets close to the lead guy, while another gets interested in her, forming a triangle of sorts in which the story revolves but despite the fact that this storyline has been used countless times in other dramas, it still worked out, mainly because it was set in the Joseon dynasty period in Korean history so this injected a different flavor to the execution.

Aside from being a love story, the drama touches on major political issues that people in ancient Korea had to deal with such as inequality, politics, discrimination – things that most people of today take for granted and it was blended so well that viewers get immersed in what is happening and they get invested in the characters and the outcome.

I loved the chemistry between Soon Joon and Yoon Shik/Yoon Hee. Park Yoo Chunwas awesome as the awkward and uptight nobleman who was overly optimistic and naïve to real world, and Min Young provided a perfect complementary character to his stiff and bookish Soon Joon, with the resilient, headstrong, smart and sassy Yoon Shik, who despite being disguised as a man, manages to capture Soon Joon’s heart. The two other characters who made up the Jalgeum Quartet, Geol Oh (Yoo Ah in)  was equal parts tough, sensitive and adorable, while the cunning charmer Gu Yong Ha (Song Joong Ki), kept things very interesting. He had this devilishly wicked smile that makes viewers wonder what he’s up to and this added levels to his character that one would not have expected from the beginning. I loved how their different personalities blended together, but my favorite moments were actually towards the beginning when Soon Joon and Geol Oh were both becoming confused about what they were feeling for their roommate, and how the truth was eventually revealed. The fighting about the sleeping positions were particularly hilarious. Even the main villains had their fair share of humanity towards the end, when everybody eventually stepped up their game to achieve the new Joseon that the king dreamed about.

I thoroughly enjoyed this drama. Towards the end, even when I wanted to find out how it was going to turn out, half of me wanted the drama to go on and on. The only regret that I have right now is that I didn’t watch it sooner. I have no doubt that I will be seeing it again, and again, and again in the near future.