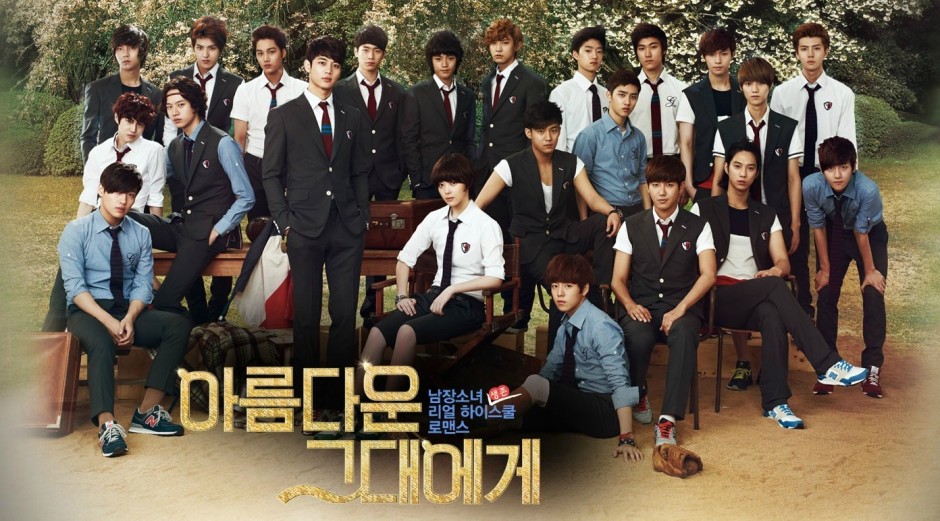 After Japan and Taiwan came out with their own versions of the popular Japanese manga Hanazakari no Kimitachi e by Hisaya Nakajo, the Koreans have now taken a crack at the very same romantic comedy drama that has produced quite a fanbase for Taiwan’s Wu Chun and Japan’s Shun Oguri through the story of a girl who pretends to be a boy to help her sports idol get back on his feet.

Gu Jae Hee (Choi Chulli/Seol Ri from girl group f(x) ) is a US-based Korean who was inspired by track star Kang Tae Joon (Choi Minho from K-pop group SHINee) when he won a gold medal in a major high jump competition in Korea. When she learned that Tae Joon was injured and was suffering from a slump, Jae Hee decides to transfer to the all boys’ school that Tae Joon attends and disguise herself as a man so that she may get close to her idol, encourage and help him return to the sport to pay back the inspiration that she got from him which helped her through her own rough patch. While attending school however, he is befriended by soccer superstar Cha Eun Gyeol (Lee Hyun Woo) who begins to develop feelings for his newfound buddy that makes him question his sexuality.

To the Beautiful You retains the basic premise of the manga — the dorms, the competition among the three dorm leaders, the school doctor, obsessive fans from the girls’ high school next door — among other things, but somehow, it proceeds on its own path, making it a whole new experience for those who have watched the previous two versions. I liked all versions of Hana Kimi but somewhow, I felt that this version felt more laid back. It was not too exagerrated like its first two versions, that depicted the series closer to the original manga. When the scenes called for goofing around, though, the cast still delivered.

It seemed that rearanging the storyline and making the discovery of Jae Hee being a girl come earlier lessened the sense of danger  for the main characters. It helped viewers concentrate on the budding love story between the two roommates and how they helped each other out when the other was in trouble. There were no main antagonists as well, just situation after situation of building up the relationships — friendship for Cha Eun Gyeol and Jae Hee and the romantic relationship between Tae Joon and Jae Hee.

I liked the execution of the sports scenes best, because it felt more natural as the actors who were cast for this series seemed very athletic. I was kind of turned off by the character of Min Heyong Jae because he never washes up after an intense workout and just changes to his school uniform immediately after training. Basically, the actors seemed very comfortable with the physical demands of their roles (running/jumping, gymnastics). I wasn’t sure if the crew used body doubles but still, the execution looked good.

My favorite character among the lot are actually the exuberant and endearing firecracker Eun Gyeol, even when he was sporting a ramen bowl haircut because he seemed so earnest and he had this genuine smile that was quite charming; and dorm #2 leader Seung Ri who seemed like such a standup (but goofy) character. This is not to say I did not like Jae Hee and Tae Joon and the other supporting cast members but the two characters just seemed to stand out from the rest.

I also liked the fashion style of the characters in the series. While there was shameless product placements of top sponsor New Balance, I admit that their designs were very cool. Other product placements were more subtle but obvious nonetheless but this did not affect the overall flow of the story so it still worked for me.

All in all, watching To the Beautiful You was a lot of fun. There were a lot of funny moments peppered throughout the drama but the dramatic moments were still very effective. I like dramas like these that are light enough to simply enjoy but heavy enough to make an impact. Great drama. Very enjoyable. I liked this ending best among the three Hana Kimis already produced. This I think, was presented as the most complete story among the lot and I, for one, appreciated it a lot.