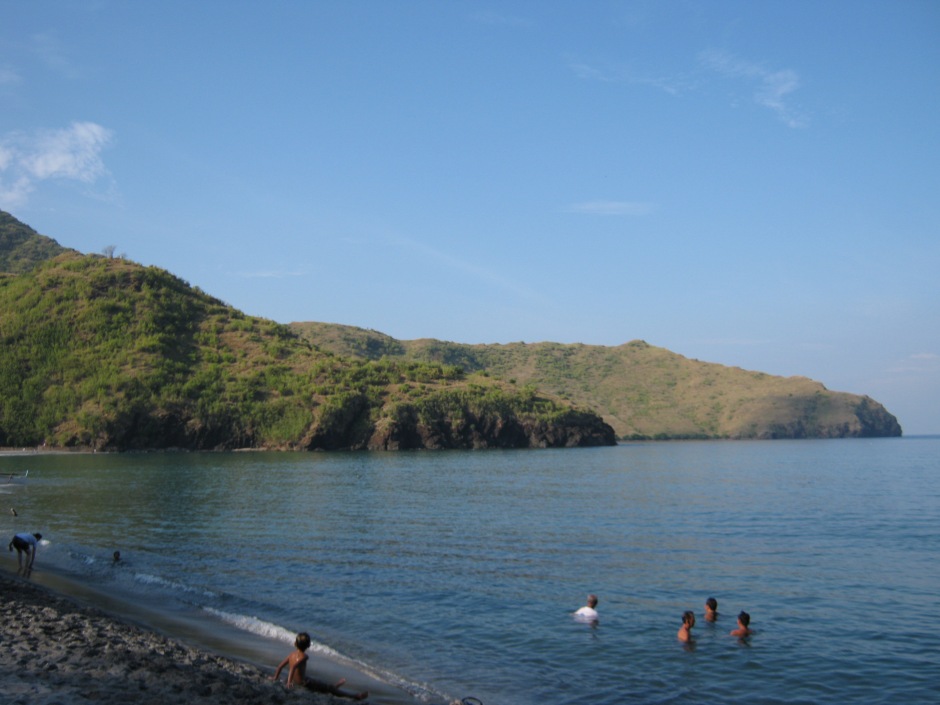 My college buddies and I recently started a tradition to go on one adventure every year and we usually time it for the arrival of our friend Genie, who is based in Italy. Last year, we went to Puerto Galera to chill out but this year, we elected to try something different, something a bit more adventurous and we decided to go camping at Anawangin Cove in Zambales, where we spent a day surviving on resourcefulness, teamwork and a few essentials. Girl power!

Our adventure started at around 3 am on a Saturday. Most of us are based in Cavite and we met up to travel to the Victory Liner station in Pasay to catch the 4 am bus to either Iba, or Olongapo. The Olongapo buses start departure at 1:30 am, and a bus leaves every 30 minutes after. However, due to uncontrollable circumstances, we got caught in traffic because of a road mishap and we only arrived at the terminal at around 5 am. We took the 5:30 bus to Olongapo. The fare costs P250 per head and travel time is roughly 3 hours via SCTEX.  I would recommend that travellers who want to maximize their time travel earlier to get to their destination sooner.

Traveling on Olongapo bound buses require travelers to get down on the Olongapo station and transfer to the terminal just across the stop to a non-airconditioned bus to Iba. The trip to San Antonio costs P44 while travel time is around an hour. For travellers who will take buses straight to Iba from Manila,  just tell the conductor to let you down in San Antonio in front of the municipal hall. The wet and dry market is conveniently situated right beside the hall for those who want to shop for foodstuff and other essentials. Get everything you need at this junction because the few stores on the island charge an arm and a leg for everything. I am dead serious. A stick of candle costs P50 each, and paper plates are 3 for P10.

Shopping for supplies is fairly easy because shopkeepers are very accommodating and helpful. Even vegetables are packed conveniently, ready to be bought. Once shopping is done, tricycles are parked a little ways off the municipal hall, ready to take travellers to Pundaquit, where the boats depart for Anawangin Cove. Tricycles cost P30 per head. Before going on the boat, travellers should send out text messages or make the phone calls that they need because there is no signal on the island.

Our round trip boat ride cost us P500 per head for a minimum of five persons (there were six of us) including a side trip to Capones Island on the way back. The fee also included a loan of cooking utensils, as well as tents for overnight use. The boatmen were even so kind as to help us with our stuff and with the setting up of the tents, seeing as none of us have tried camping before. Our contact was Kuya Joven (Smart 09193215252/Globe 09159599595).

According to some of my friends who went to Anawangin before, the place used to be secluded  but now as more campers have trooped to the island for some R & R time, trekking and swimming, there are  shower stalls and public toilets established in the area with a single battery powered light turned on at night. Other than that, the entire area is blanketed in darkness come nighttime.

Some camping tips I learned along the way:

1. Waterproof your stuff when crossing to the island. The water sometimes gets into the boat.

2. Cook while its still early. It is hard to prepare food when it is dark. Plan simple dishes. It is hard to Mcgyver your way to a complicated dinner. The natives will get hungry pretty fast especially with the long journey.

3. Bring firestarters (EZ fire) to start bonfires for cooking/ staying warm. These can be bought in supermarkets and are broken into chunks, lit and placed in the bottom of charcoal or wood to trigger the blaze. It is also good to bring portable propane stoves for cooking.

4. Bring a first aid kit for minor booboos and accidents.

I must admit that I was a bit worried that we might find ourselves bored without anything to do with the forced  technology detox on the island but with the swimming (Anawangin has gigantic waves), roughing it and the bonding, we actually found that we were able to talk a lot and catch up on stuff that’s been happening in the past months better. It was just like a sleepover, only in tents, plus we had to work harder for our food.

The second morning, we decided to walk around the island. Some of the adventurers, we saw were trekking on a nearby trail atop mountain situated right next to the island. Since we had no time for it before the boatmen picked us up at around 8:30 am, we opted to prepare for our journey. When they arrived, they brought bad news. We wont be able to see the lighthouse in Capones because the waves were too big on that side of the island for them to dock the boats. I was disheartened but they assured us that we could still swim on the other side, so I thought to myself, just go for it. Its still better than nothing.

When we arrived in Capones Island, which is 30 minutes away from Anawangin, all my disappointment disappeared. The island was breathtaking. It had fine white sand and a beach to die for. Pristine waters so clear that the bottom looked more like a swimming pool than the ocean. The changing colors of the water indicated its depth — light blue for waters near the coast while the deeper ends are a darker shade of aquamarine. This is nature at its finest. Mother Nature at work.

The boatmen told us that the island was also open for campers but there were no convenient shower stalls to wash off like in Anawangin, so most campers opt for the latter. As an option, boatmen take their fares to Capones for sightseeing and swimming and they seem to enjoy it just as much. However, the sheer beauty of the island, for me, was enough of a come on for adventurers to stay on the island and take in the entire camping adventure. Another island that is open for camping is Nagsasa but it was farther off according to the boatman. He said it was similar to Capones but it took an hour to reach by boat.

Since we were only passing by Capones on our way back, we had to wash off in Pundaquit. Luckily, there was a water pump near the waiting area, as well as makeshift dressing rooms made of hay on the sides where travellers can change clothes before they go on their merry way home.

All in all,  camping was a unique experience that I will not soon forget. I am proud to have survived the night along with my girlfriends, despite the long travel and the hard work in setting up camp. I’m glad that we did it and we did it together. I’m pretty sure my boy Bear Grylls (Man vs Wild) would have been proud of us. Til the next adventure!