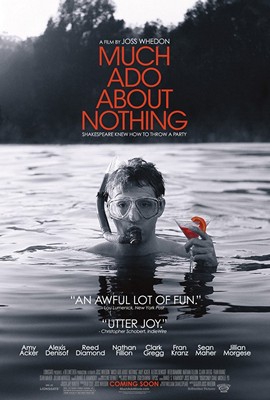 In the same year director/screenwriter Joss Whedon released Marvel’s The Avengers, effectively cementing him as one of the best action/adventure filmmakers of all time (in my opinion, anyways), he also directed an adaptation of Shakespeare’s Much Ado About Nothing and shot it for 12 days in his home in Santa Monica.

The plot basically follows the love stories of two central couples, the flippant Senor Benedick (Alexis Denisof, Angel) and the razor tongued Beatrice (Amy Acker, Dollhouse), who share a failed romantic history and hide their feelings for each other with barbs and character attacks; and the young Count Claudius (Fran Kranz, Dollhouse)and Lady Hero (Jillian Morgese, The Avengers/waitress from the restaurant) whom he fell for at first sight. As Hero’s father Leonato (Clark Gregg, The Avengers) and Don Pedro, the Prince (Reed Diamond, Dollhouse) play cupid to them, the Prince’s jealous bastard brother Don John and his cohorts, seek to put a wrench on the two couple’s happy endings. Nathan Fillion (Firefly) also  stars as Dogberry, the constable in charge of Messina’s night watch.

I must admit that at first, I had trouble reconciling the contemporary setting with Shakespeare’s prose. I felt like the weight of Shakespeare’s words, which spoke of wars and the the lords and ladies, and the majesty of old Italy, were undercut by the setting, which was a house party with a bunch of friends hanging around and enjoying wine. It seemed very different from Baz Luhrman’s modern day adaptation of Shakespeare’s Romeo and Juliet which starred Leonardo Dicaprio and Claire Danes which made an effort to really adopt the words with the environment.

It seems like an unfair comparison because Luhrman’s movie obviously had a bigger budget to work with while Whedon’s movie seemed like a laid back art project performed by a bunch of friends whom he worked with in his different projects. If one is familiar with Whedon’s work, they will immediately recognize actors from Angel, Buffy, Dollhouse and The Avengers in this movie and it gets pretty fun to identify which project with Whedon they were in.

But what’s really striking about this Whedon adaptation is his ability to bring all of these great actors together and cast them perfectly in a classic story so that they can make these characters thrive in a modern day setting, all within the confines of a Santa Monica summer home.

I think Alexis Denisof is a standout in this film. While he does not exactly strike people as a Hollywood leading man type, the personality he injects into the character of Benedick makes him shine as the most likeable character in the bunch. Amy Acker as film’s central heroine does not give an inch, answering each of Benedick’s line with a barb of her own.

The cinematography is marvelous. Every shot is framed perfectly to showcase the relaxed environment and Whedon’s beautiful home and the black and white treatment gives the film a distinctive sophistication identified with vintage Hollywood movies. I also liked the scoring in Hero’s funeral service and while I don’t really get how somebody could easily forget such as public shaming as she suffered out of love in the snap of a finger (this is entirely Shakespeare’s fault), it makes sense that a happy ending should happen in an intimate celebration among friends and family.

All in all, it was a refreshing watch for me, knowing this was the same director who helmed my favorite sci-fi, fantasy, action adventures on film and television. It was artistic but not too highbrow. It was fun when it needed to be and somber when the story commanded it. Basically, the film did well enough given its limitations. For me, the film’s greatest strength is the familiarity of the actors and the directors with each other that producing a quality film, even on a shoestring budget is just a given. In fact, I wouldn’t be surprised if these actors were working pro bono in deference to their respect of Whedon, who placed his confidence in them to shine in their movie/TV projects. At the end of the film, I’m still weirded out by the house party setting for this Shakespeare adaptation but it definitely made me want to grab a glass of wine and hang out by the poolside (unfortunately, there is none nearby. Bummer). That’s just a good feeling.