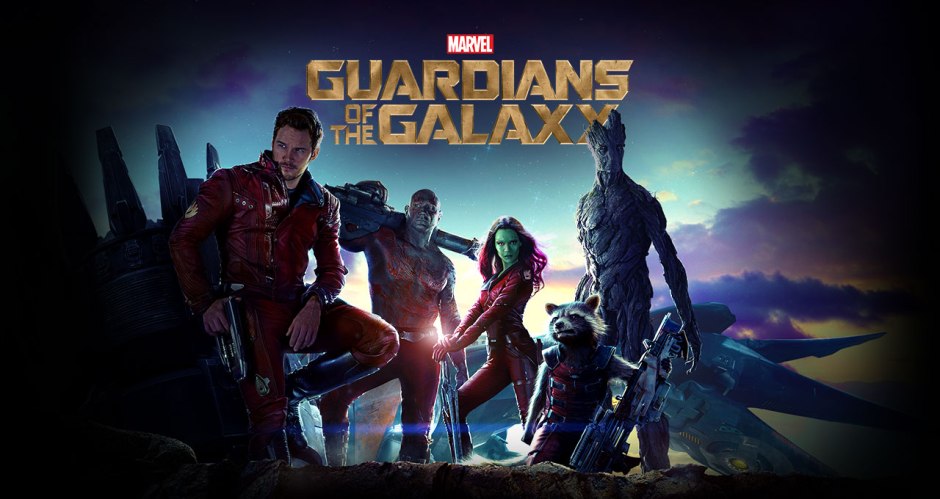 I aaaaaaaahhhhym… hooked on a feeling — and its a good one.

Honestly, I have never heard of Marvel’s Guardians of the Galaxy until about a year or so ago when Marvel Studios decided to greenlight a movie starring a band of unlikely heroes destined to save the galaxy from one of  Thanos’s allies, Ronan the Accuser. After an extensive marketing drive and a super cool trailer, it easily became one of the movies I was most looking forward to see in 2014 and man, this movie did not disappoint.

Peter Quill aka Starlord (Chris Pratt), a petty thief affiliated with a band of space pirates called the Ravagers,  finds himself in a pickle when he steals an orb with one of the infinity stones, a weapon so strong that it gives the bearer the power to destroy an entire planet with just one contact. Unsure of what the orb contains and with Ronan the Accuser’s lackeys hot on his tail, Starlord crosses paths with Gamora (Zoe Saldana), Thanos’s favorite daughter/assassin, bounty hunters Rocket (Bradley Cooper), a genetically modified trigger happy raccoon, and his sidekick, a tree like humanoid named Groot (Vin Diesel). After they all get arrested and incarcerated by the Nova Corps, they stage a daring escape with the help of Drax the Destroyer (Dave Bautista aka Batista), who thirsts for vengeance against Ronan (Lee Pace), who wants the orb for himself to eradicate the entire Xandarian race. Now, the band of five misfits must find in themselves the courage to save the planet and prove that they are more than the losers the galaxy has pictured them to be.

I must say that Guardians of the Galaxy has immediately catapulted to my second favorite Marvel movie after The Avengers. The trailer promised a fun and entertaining watch but director James Gunn (who ironically won a Razzie as worst director in star studded ensemble Movie 43) was able to achieve so much more. It was really a challenge to make people care about characters that they are not familiar with and Gunn managed to do that and balance the exposure of these five strong characters and give the audience moments to connect with each one of them. Its really hard to handle an ensemble cast and somehow, Gunn was able to pull it off marvelously.

I’ve seen Chris Pratt play supporting roles before GOTG but he really stepped up his game in his his first major break. He put his great comedic timing and charm to good use as the smart alecky Peter Quill, leader of the Guardians, but made sure that he also delivered on the more physical aspects of his role. While Gamora and Drax were great in their respective roles, my favorites were the two purely CGI characters — Rocket the Racoon and Groot. Bradley Cooper’s voice acting had such attitude that he made his character larger than life, even when he is actually the smallest character of the lot. Vin Diesel as Groot had no other line but “I am Groot” but his character was easily the most endearing member of the cast. He was adorable and kind, and that was why audiences loved him. Oh, and leave us not forget Michael Rooker as Yondu. Anyone who has seen Rooker play Merl on The Walking Dead knows that he is not a guy to be messed with as the blue skinned head of the Ravagers, he did everything to uphold his image.

What’s great about GOTG is the balance that filmmakers were able to achieve in the action, drama and comedy aspects of the film. The transition from an action packed moment to one of drama (mostly Groot), or comedy (mostly Rocket or Peter) was so fluid that it did not at all seem forced. The great banter, owing to the smartly written script (James Gunn, Nicole Perlman) surely encouraged a bunch of audience to pick up a GOTG comic book on the way home to learn more of the group’s antics. Not to mention the dramatic parts were so well executed that I’ve read a couple of reviews comparing the film to George Lucas’s iconic Star Wars. My favorite scenes were easily the Nova Fleet locking together to form a protective shield against the Dark Aster, and Groot sacrificing himself to save the group. Those were definitely tearjerkers for me. Yeah, its embarrassing to cry because of a comic book movie but these were great pieces of cinema.

I also loved the soundtrack, which were really iconic songs from the 70s and 80s. I loved it so much that I’m listening to the soundtrack as I write this. One thing I didn’t like as much was the limited exposure of Ronan the Accuser. I would have wanted him to be more badass to amp up the impact of the final showdown between him and the Guardians.

All in all, I loved Guardians of the Galaxy because it had heroes that had no great superpowers but had a lot of heart. It was actually the ultimate underdog movie made even cooler by the fact that all of the adventures were taking place in outer space. True, some of the characters had anger management issues but hey, they’re only starting to turn a new leaf and embracing their role as actual heroes. Mainly, I had a lot of fun watching this movie because I felt that the crew had a lot of fun doing the film. It makes me much more excited to see the sequel.