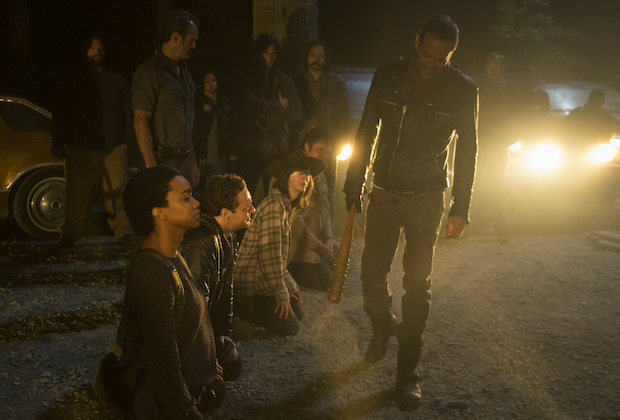 I may have already warned you in the title that its gonna be a spoiler-filled review but just to be on the safe side, I’m warning you again. Do not proceed if you haven’t seen the episode or if you don’t want to know who dies.

Yup, that’s a confirmation that not one but two beloved members of Rick’s “family” really got their head bashed in by the show’s latest big bad Negan (Jeffrey Dean Morgan) and it broke my heart into a million tiny pieces.

The LOWDOWN: The episode picks up from the last scene of the season 6 finale with Rick and his group surrounded by Negan and the Saviors. Negan wants Rick to pledge allegiance to him serve him much like the Hilltop people have caved to his wishes. However, Rick, being Rick, initially resists. And Negan, being Negan, will not stand for it. First, he selects one of Rick’s finest and bashes his skull in as a revenge for Rick and his crew killing his men, but one wrong move results in a second the bashing that brought millions of the show’s followers straight to therapy.

When episode director Greg Nicotero said in an interview that the Season 7 pilot was one of the most emotional episodes ever shot for the show and the actors all pulled off their best performances, he wasn’t kidding around. Barring the emotional wreck that was the result of this episode, everything was executed to perfection — no exaggeration.

The first scene, and subsequent death of Abraham answered the question as to who got Lucilled that plagued the minds of viewers for close to a year. It made sense that it would be Abraham because he was a soldier and one of Rick’s strongest allies. He stayed defiant until the end though, and talked back to Negan to illustrate said defiance until the last moment. It was so touching, the way he flashed a silent peace sign at Sasha before he died and the pain in the faces of both Sasha and Rosita could be felt through the television screen like a very real thing.

Abraham was already a major loss to Rick’s family because in the past few seasons, he has indeed become one of the core members of the group, but Negan’s long and offending speech made Daryl go berserk, and this earned another hit for the team when, out of the blue, Negan smashes Glenn’s head in graphic fashion. He manages to tell Maggie “I’ll find you” while one of his eyeballs almost falls off its socket from the strength of the beating, but Negan does not stop there — he proceeds to bash Glenn’s head in until there is nothing left but brain matter. All through this, Rick’s family, simply have to kneel and suffer in silence until Negan is done with them.

When the showrunners faked out the fans with Glenn’s first “death” last season, Twitter exploded with the ire of fans because let’s face it, this Atlanta pizza boy is perhaps the most loved character the show. When Rick and his group were about to get shish kebabed at the Terminus, everyone was also worried about Glenn. Why not? From the beginning, Glenn has been the only person who has hung on to the person he was way before the zombie apocalypse happened. He is loyal and smart and resourceful and more often than not proved to be Rick’s voice of conscience who balanced him out when he was feeling less than sane. It was always Glenn who people turned to. Glenn was good, even when he was surrounded by circumstances that could have turned him. Man, I’m still tearing up as I write this. I love Glenn and it will take a while before I move on from this.

But wait, there’s more. Negan is far from done as he will not stop until Rick is broken a his knows his submission is key to getting the others to follow him. He proceeds to make a statement by making Rick go through the hoops, pitting him against a swarm of walkers and finally, asking him to hack off Carl’s arm using his own axe or else, he kills off the rest of his family and lays waste to Alexandria. This is a twist to the comic book where Negan hacks off Rick’s own arm. I’m glad that it didn’t happen.

Bravo to both Jeffrey Dean Morgan and Andrew Lincoln for pulling off these difficult scenes with such depth of emotion.

Jeffrey Dean Morgan didn’t play Negan in typical villain fashion with obvious psychosis or sadism, but his matter of fact way of stating the order of the new world permeates the viewers senses because of the hidden menace in his delivery. He smiles knowingly , not with a smirk or a grimace, but with a deliberation that hints that he has something up his sleeve. And because he can back up his threats of ruthlessness with flourish, ease and a sadistic enjoyment, viewers can’t help but be afraid of him and for the safety of Rick’s group.

While Andrew Lincoln has portrayed Rick in various stages, yesterday’s episode was another testament to his brilliance and versatility as an actor, especially during his gradual breakdown when he was asked to choose between the lives of his “family” and hurting his only son. That was heartbreaking, especially given the type of person and leader Rick is. To reach that level of brokenness  in such a brief period of time was something that would haunt me forever.

Kudos to the fans who analyzed the teasers frame by frame to figure out who got the bat. Most of the analysis I came across were on point, in guessing that it was gonna be Abe and Glenn. After all, it was Glenn who famously got killed off by Negan in the comic books in one of the most brutal beatings in the series which happened true to form in yesterday’s episode and Abraham was supposed to already be dead by this time in the comic books. It was just that fans of the show have so much emotion invested in the characters that they were holding out hope that the television series will deviate from the source material to save these two characters, who are loved by many like members of their own family.

And even more kudos to The Walking Dead showrunners for the attention to detail and the general brilliance in the cinematography , the scoring and the pacing. Everything was done in slow deliberation to give respect to the brilliant performances of every actor in the cast. Everything was framed to perfection, every tear was delivered with pain and certainty, every use of special and practical effects (with the pieces of brain matter on Lucille and on the gravel), everything worked together to deliver one of the most powerful and disturbing episodes of the show, and that speaks for a lot given the intensity of this series per se. How long it would take to recover from this double death, I do not know but one thing’s for sure, despite my pain, I am more compelled to follow this show for its brilliance. Hats off to everyone. Thank you for this episode. Really. Now let me get back to being an emotional wreck and get back to you once I’ve recovered somewhat.