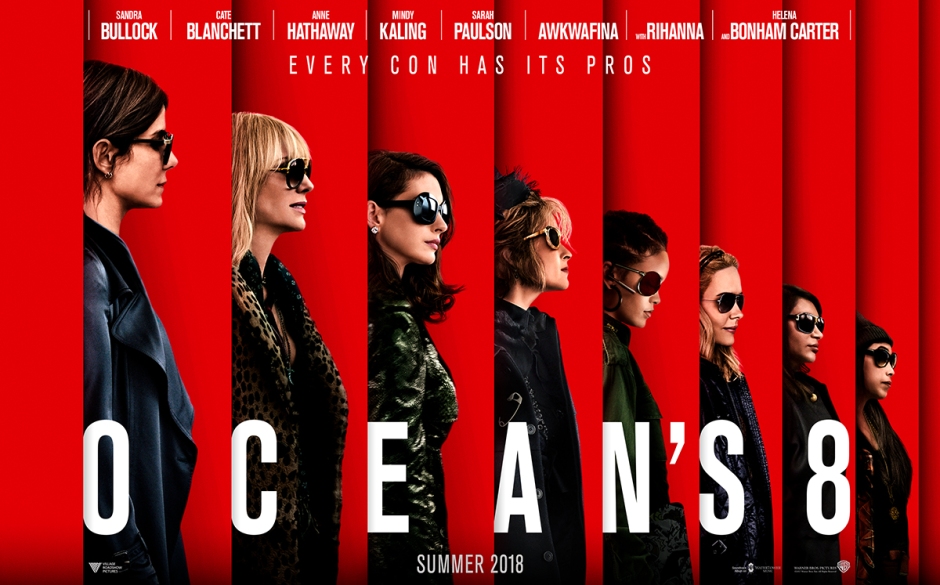 Its been a while since we’ve had anything from the Ocean’s franchise and its been a few years since we’ve seen Sandra Bullock on the big screen since Gravity. Ocean’s 8 seemed like a fitting comeback for the talented actress and to be backed up by an equally talented roster of A-list actresses was just icing on the cake. Still, while Ocean’s 8 was a solid film, I can’t help but feel though, that it didn’t quite reach the bar set by its predecessors.

Synopsis: Debra Ocean (Sandra Bullock) gets out of prison after spending five years incarcerated because of her lover’s betrayal. While she was in prison, she crafts an intricate heist that even her brother Danny (George Clooney) thought was brilliant but too big to pull off.  Her ambitious plan involves getting her partner in crime Lou (Cate Blanchett), jewelry maker Amita (Mindy Kaling), hacker 9-Ball (Rihanna), scammer Tammy (Sarah Paulson), bankrupt fashion designer Rose (Helena Bonham Carter) and hustler Constance (Awkwafina) to steal a $150 million Cartier necklace off the neck of celebrity Daphne Kluger (Anne Hathaway) at the high profile Met Gala.

Ocean’s 8 had a lot of pressure riding on its shoulders. First off, it had to meet the expectations of fans of the Ocean’s trilogy helmed by George Clooney and Brad Pitt which started way back in 2001. It can be recalled that Ocean’s Eleven spun the heist genre on its tail and delivered thrills and brilliant plot twists one after another and made its mark on fans all over the world. The original movie also spawned two equally successful sequels which added to the popularity of the franchise.

Ocean’s 8 utilized the same formula as its predecessors. There was an all star ensemble cast, strong acting and a good plot that connected the spinoff to the franchise. Unfortunately though, while everything was solid, it seemed predictable, and that took away from the thrill and excitement of the movie as a whole.

Don’t get me wrong. There were many things to like about the movie. It was all about strong women pulling off an ambitious heist on the biggest celebrity event at the super secure Met Gala. There was nothing wrong with the plot or the execution.

However, the problem was that because it didn’t deviate from the original formula, it seemed that everything that happened was not surprising. The team encountered unexpected obstacles, sure. But those obstacles seemed to have been addressed too easily. It seemed that there was nothing really, that stood in the way of the team pulling off the heist which made it a bit boring. Even when they revealed the supposed twist in the end, the reveal seemed weak because Ocean’s Eleven, Twelve and Thirteen did it all before and did it better.

Meanwhile, the attempt to connect Debra to Danny seemed too weak and lazy because they simply decided to kill off the original character and simply feature his presence with a marker and a photo. They could have fleshed out this part more, even without the participation of George Clooney so it didn’t seem abrupt.

The addition of James Corden as insurance investigator John Frazier to the film also did not help in solidifying Debra and her crew’s status as a serious addition to the franchise. Because Corden is such an established comedian, even when he is not trying to be funny, its hard for him to be taken seriously and that’s a minus for a movie that is trying to make its mark on an already established franchise.

All in all, Ocean’s 8 was not a bad movie at all. Its just that the first movies set the bar too high that it became too much for the spinoff to meet. It was a good attempt to showcase women empowerment though and it gets my respect for that.