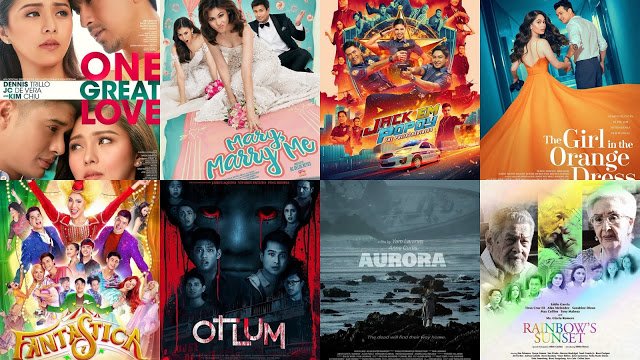 Its that time of the year again when cinemas are devoted to purely Filipino cinema and this year’s entries to the Metro Manila Film Festival will make you go dizzy from choosing which movie to watch with your loved one.  If you’re not yet updated about which films to watch, here’s your definitive guide to help you navigate through this year’s eight entries to the annual MMFF.

While there are no Shake Rattle and Roll installment this year, there are two horror pieces to watch out for. Sigaw director Yam Laranas makes his horror comeback with Aurora, starring Anne Curtis. The story centers around a woman and her sister, who strike a deal to look for bodies from a sunken ship. Pretty soon, they get more than they bargained for when the souls of the dead seek them out to haunt them. Its dark and brooding vibe seems quite promising as the stars promise an elevated level of horror with this movie.

Otlum, another horror entry, revolves around a group of young adventure seekers who challenge themselves by staying overnight at an abandoned orphanage. The question of who gets out alive after the haunting begins will only be answered by the movie. This is perfect to watch with your barkada for your hangout sesh this holiday.

On the romantic front, there’s Jessy Mendiola and Jericho Rosales’ The Girl in the Orange Dress, a story about how two characters deal with the aftermath of a one night stand and their growing feelings for each other. While the romance starts with an unconventional premise, it shows promise with the strong team up of these two Kapamilya stars.

Mary, Marry Me promises to be a hoot with real life sisters Alex and Toni Gonzaga playing siblings who get romantically involved with the same person (Sam Milby) at different points in time. As one sister prepares to marry their dream guy, how will the other fare with watching her sibling and former flame walk down the aisle? Romance and comedy are definitely in the air with the natural chemistry of these hilarious sisters with the addition of Sam Milby as their love interest.

Regal Films takes the serious route this year as it tells the story of one woman (Kim Chiu) and her journey to discover her One Great Love, whether it is her ex (JC de Vera) or his best friend, whom she has slowly developed feelings towards. What’s great about this film is that it doesn’t give the ending with the trailer and gets audience to think about which pair to ship — will it be Kim and JC or Kim and Dennis? The only key is to watch the movie to make the best choice.

True love chooses no gender or age and for Ramon (Eddie Garcia), the time to reveal his sexuality and his romance with his long time kumpare Fredo (Tony Mabesa) comes when the latter is diagnosed with a terminal illness. Rainbow Sunset is a drama that follows a family’s quest to accept their father’s best kept secret amid the judgement of society. It is uncommon for movies to focus on LGBT stories for seniors but Rainbow Sunset explores the family dynamics that surrounds this plot twist with the excellent acting guaranteed from Garcia, Mabesa and Gloria Romero, who plays the family matriarch.

Box office queen Vice Ganda returns this year for Fantastica: The Princesses, The Prince, and the Perya. In this new movie, Vice Ganda plays a character who tries to save her family’s carnival from bankruptcy with the help of her two leading men, Dingdong Dantes and Richard Gutierrez. Expect plenty of laughs from her antics in this film.

Finally, Ang Probinsyano star Coco Martin teams up with noontime powerhouse Maine Mendoza and the Prince of Comedy Vic Sotto in an action comedy about three police officers team up to take down a major crime syndicate. Expect plenty of action and laughs from Jack Em Popoy: The Puliscredibles from this piece.