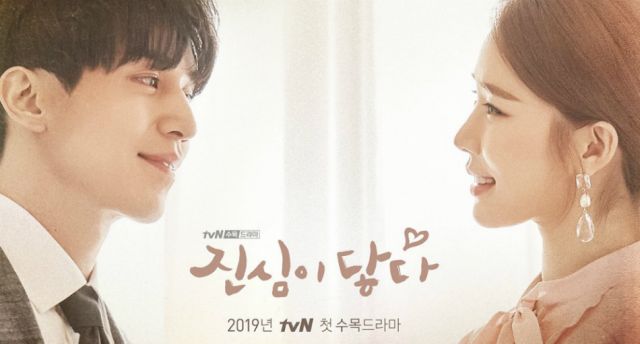 I finished watching tVn’s Touch Your Heart last night and I still find myself wallowing with separation anxiety as I went about my routine this morning. Frankly, I would’ve finished watching this drama sooner but I kept myself from bingeing on more episodes because I didn’t want to say Kwon Jung Rok and Oh Jin Sim just yet. Never have I felt for any Korean drama this way and that says a lot coming from a Kdrama vet like myself.

Synopsis: Following a drug scandal that has sidelined her career for two years, top actress Oh Yun Seo aka Oh Jin Sim (Yoo In Na)  gets a shot at a comeback for with a legal drama written by a popular screenwriter. However, in order to land the role, she must immerse herself in the actual legal field with on the job training at a law firm for three months. She is paired off with ace lawyer Kwon Jung Rok (Lee Dong Wook), a serious and uptight crusader of justice with a bias against celebrities.

To say that I loved Touch Your Heart would be an understatement. Like its title, it manages to connect with viewers on an emotional level even though the story was technically very light, as was the subject matter. This is credited to the strong character development that the showrunners successfully pulled off from the leads to supporting cast.

I loved the strong chemistry between Jung Rok and Jin Sim. They really complement each other in a unique way because of both their similarities and differences. I loved that even though Jin Sim was initially built up to be an airheaded and vain celebrity, it did not take long for the series to reveal a different facet to her character. Within the first episode, it was already revealed that she was quite smart and willing to work and learn as long as she put her mind to it. This makes her character super endearing, especially during the scenes that show her strength in the face of adversity. Her sincerity and her positive outlook was infectious and you can’t help but root for her to succeed.

The evolution of Jung Rok’s character from the first episode to the last was astounding and beautiful to watch. From a stern and unbending sourpuss to all out fanboy, watching Jung Rok soften and open up his heart completely to his secretary was a gradual unraveling that made viewers fall in love with him even more.

I love the innocence and the purity of Jung Rok and Jin Sim’s love story. While they were both adults, watching them fall in love like teenagers was truly exciting to watch. It was sweet and sincere, and funny at the same time. I love Jin Sim’s natural cuteness and how Jung Rok’s matter of fact delivery of statements like he was always in court but boyishly grins with pride when he thinks he does a good job in pulling off romantic gestures for his lady love. Its true that the kissing scenes were milder in this series than in others but it actually makes sense given the type of characters Jung Rok and Jin Sim have.

The supporting cast also deserves credit for pulling their weight and contributing to the overall success of the drama. Their presence contributed to the development of Jung Rok and Jin Sim’s story and also ensured that there was no dull moment in the series. Viewers become just an invested in the love stories of Yoo Reum and Se Won, of Atty. Dan and Atty. Choi, of Mr. Lee and Ms. Yang. There is no point that viewers feel the urge to skip forward because each scene, whether they had Lee Dong Wook and Yoo In Na, is always interesting and entertaining.

They fall in love with the characters of super fanboy CEO Yeon Joon Kyu and CEO Yeon Joon Seok who, while delivering on the funnies, are super protective of their wards and treat them like family. I love the loyalty of Hyuk Joon to Yun Seo and his genuine concern for her welfare. I love the brusque bromance between Jung Rok and Se Won, as well as the fierce friendship between CEO Yeon and Jung Rok. This really put his character in perspective especially when he was in a crisis with his lovelife and career life.

I love the sense of family that this series conveyed. From the Always Law Firm and Yeon Entertainment, there was unquestionable loyalty and camaraderie that were manifested whenever any of the members encountered a crisis. There was genuine support and love among the members of these two organizations and it just makes audiences feel like part of the family.

At the same time, it also addressed the flipside of the glitz and glamor of the Korean entertainment industry – the pressures that artists face, the lack of freedom to pursue their happiness and the harsh public censure at the slightest hint of a scandal. The public can be quite unforgiving and the internet is not known to be kind when it comes to hot issues. I even had a wake up call about rumored romances because I am a serial shipper (one of them being LeeDongWookXYooInNa) and how it can become suffocating for artists that we admire. It also shows the Korean justice system at work and while there was less focus on the court cases than the love story, the cases were actually quite interesting. There were very few heavy and dramatic episodes compared to the light and funny ones but everything was delivered perfectly and connected to the viewers on separate levels.

A very minor criticism though would be the amount of product placement scattered throughout the series (Chanel, W tea, Subway, to name a few) but it wasn’t the level of Meteor Garden 2018 so it didn’t really disrupt the flow of the series. I would also have liked Mr. Lee’s arc to have ended with a bit more hope because I felt he deserved more after showing that much devotion to Ms. Yang. Plus, I would have liked to have more skinship – even hand holding or hugs would have been enough to tide me over. LOL. I appreciate what I got although I wouldn’t have minded more.

All in all, Touch Your Heart delivered an honest, heartwarming, simple but effective love story portrayed by characters that also touch the hearts of the viewers. The final scene and dialogue, in particular perfectly captured the essence of the show. I have nothing but glowing words for this series and sincerely hope that Lee Dong Wook and Yoo In Na will work on another project like this one because their chemistry is just too strong to ignore.