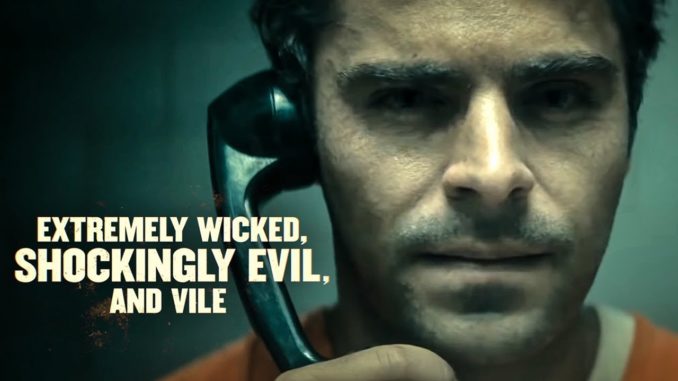 After Joe Berlinger’s masteful docuseries Conversations with a Murderer: The Ted Bundy Tapes, I was more than looking forward to the full-length feature film Extremely Wicked, Shockingly Evil and Vile. The film is an exploration of Ted Bundy’s other side as a family man, living a normal life with his girlfriend Elizabeth Kendall amid his killing spree in Utah and Colorado in the late 70s.

Synopsis: Law student Ted Bundy falls in love with single mother Elizabeth Kendall at first sight and helps her care for her daughter Molly like a responsible stepdad. However, when police go on a hunt for serial killer that has been victimizing college girls across different states, Ted is collared as one of the suspects and is forced to face charges for the most celebrated murder trial in the early 80s.

Extremely Wicked, Shockingly Evil and Vile, the title lifted from the words of presiding judge Edward Cowalt to describe the acts perpetrated by then defendant Ted Bundy for the gruseome Chi Omega murders, received much hype for casting former Disney star Zac Efron in the role of the most notorious serial killer in US history. The role was a major challenge for Efron, who is better known for his role as a pretty boy and a singer rather than dramatic and intense roles like this one. Lily Collins takes on the role of Liz Kendall and on paper, these two make a wonderful looking couple.

However, I was less than impressed by the overall outcome of the film. It seemed that Berlinger already explored Bundy’s story to an extensive length through the docuseries that there was nothing quite as interesting to include in the feature film. Apart from the revelation of who gave Bundy’s name to authorities, there was nothing new that the film presented.

Unfortunately, because audiences already witnessed actual footage of the real Ted Bundy through the docuseries, Zac Efron’s performance fell short of expectations as it seemed like he was trying too hard to strike a balance between the charming and menacing aspects of the serial killer’s personality. Don’t get me wrong. Zac Efron is a talented actor but the bar for the role was set by the original Ted Bundy so its natural that he would fall short.

Jim Parsons’ portrayal of state prosecutor Simpson was also a dud. It seemed like Doctor Sheldon Cooper suddenly entered the courtroom and narrated the events at the Chi Omega murders and there was nothing that made it come close to the original. John Malkovich was the only saving grace of the film as he injected some sort of life into his character and made the trial somewhat interesting. As with the original Judge Cowalt, Malkovich portrayed his disappointment at how a bright young man with huge potential like Ted Bundy wasted his gifts to commit atrocious acts and he did it without much fanfare.

I suppose that the film was intended to generate interest in the other side to Ted Bundy but because the storytelling seemed too linear, I almost fell asleep during the first 40 minutes of the film. I suppose the film’s intent was to show Bundy’s only soft spot which was for Liz to illustrate some sort of humanity in him but because audiences are not compelled to root for Efron or Collins, everything fell flat in a predictable finish.

All in all, Joe Berlinger did a great job with the documentary but perhaps this was also the same reason that this film felt lacking in so many aspects. The film did try to inject a level of coolness to the movie with its heist type musical score. It also tried its best to make Ted Bundy’s escapes and ploys appear masterful but it was unable to sustain the interest of the audience in its mechanical approach to telling the story. Berlinger should have quit while he was ahead. Extremely Wicked, Shockingly Evil and Vile was a snoozefest.