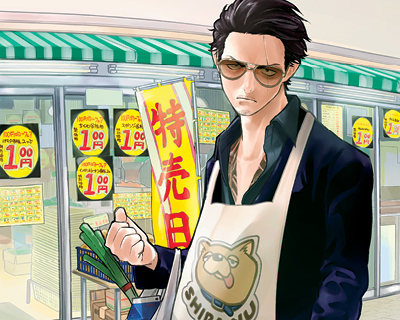 I’ve been looking forward to The Way of the House Husband (Gokushufudō) since Netflix announced that it was working on the anime adaptation of the manga series written and illustrated by Kousuke Oono. As expected, it was a load of fun.

Synopsis: Tatsu is well known yakuza who goes by the name Immortal Dragon. His name alone sends shivers down the spines of his enemies because his feats were legendary. One day, Tatsu simply disappears, never to be heard of again. In present day, he embraces his new role as a house husband who is fully supportive of his wife Miku.

If you’re ever looking for a quick binge, The Way of the House Husband would be a great recommendation. It runs for only five episodes of 16-17 minutes. Each episode is sub divided into shorter segments so the anime covers 30 episodes from the comic in total.

The Way of the House Husband is really funny as it depicts Tatsu’s complete 360 from his life of crime. What’s more, he makes a career out of being a house husband and fully commits to the role. From getting bargains to earning loyalty card points, to doing DIY projects, attending cooking class and even going to the gym with his new buddies — middle aged housewives who have welcomed Tatsu into their fold.

Tatsu’s domestic pursuits, juxtaposed with his intimidating silhouette and his background becomes even funnier as people shudder in fear of him, even though he is not doing anything violent. His demeanor actually reminded me of Saitama from One Punch Man.

I loved the voice acting by Kenjiro Tsuda and I was really happy to see that the actor actually looked like Tatsu in real life.

In terms of the animation, the characters don’t move that much so it felt like you were simply colorized comic strips. I don’t have a problem with this because the voice acting is so good.

The one complaint I might have is that The Way of the House Husband seemed too episodic. It seemed to jump from one episode to another and each one is too short to really tell a full story. It seemed that each episode had one punchline and then it moves to the next. I would have liked the series to develop more interactions with Tatsu and his wife, since he turned over a new leaf just for her. The same goes for his former associates and rivals.

All in all, The Way of the House Husband is an entertaining way to spend your time. It will make you laugh and fall in love with the Immortal Dragon who can cook, clean and whup a*s without even trying. Watch out for the creepy way he sings Happy Birthday. It will leave you in stitches.