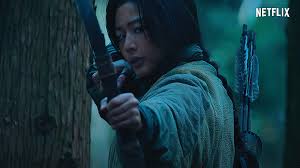 Let me just say for starters that I highly doubt if the Kingdom franchise will ever produce a dud. Recent installment Ashin of the North, an accompanying story to tell the origins of the mysterious character played by Jun Ji Hyun at the end of season 2 was a shocking, well thought out addition to the franchise and tied into the story perfectly.

Synopsis: Ashin (Jun Ji Hyun) belongs to the border tribe of Jurchens whose identity is yet to be recognized by the Joseon Kingdom. In an effort to save her ailing mom from death, she tries to use the mysterious resurrection plant on her. Unfortunately, while on her errand, her village is ruthlessly massacred by the barbaric warriors of Pajeowi whose attack is prompted by the death of their own people. As the only survivor, Ashin seeks the help of Commander Min Chi Rok (Park Byung Eun) to avenge her family’s death.

I loved that Ashin set out to frame the story using its typical formula. A brave young heroine who experiences tragedy at an early age. A loyal subject of the kingdom who gets betrayed by his master, a competent commander who tries to do the right thing but ends up betraying his principles because of the bigger picture.

These all sound familiar because this was also the basic framework of the first two seasons of Kingdom. However, this time there was a twist. Not everything was as it set out to be. The villain of the piece was not necessarily be the main baddie at all. There were multiple incidents that blurred the line between right and wrong and our heroine, Ashin was straddling a very tight rope between right and wrong the entire time.

Ashin was far from being an angel but she was very human. Her vulnerabilities, her love for her family — a heartbreaking dynamic perfectly illustrated by veteran actor Kim Roi Ha with both the young and adult Ashin.

Ashin was a rootable heroine mainly because audiences hurt for all the tragedies that she suffered through in her life. Jun Ji Hyun’s dialogue was very limited but her actions spoke volumes. There was a quiet deliberation in her steps and her look was enough to convey her grief, her contempt and her joy at serving her enemies their due. She was the perfect person to play the role of Ashin.

Young actress Kim Shi Ah also did justice to the role of young Ashin. Her pluck and courage to power through the tragedies in her young life was enough to put tougher characters to their knees but yet, she persevered and sought justice without depending on anyone.

Because viewers now understand her motives, it became even more intriguing how she will play into the third season of Kingdom. Her role is not exactly black and white. And this is what makes her such a loose canon. Her vengeance has a long way to go and it is very intriguing how her interactions with Lee Chang will be.

Commander Min Chi Rok was a familiar character because audiences already know him as the loyal investigator and archer who stood by Prince Lee Chang’s side in the midst of zombie infestation. As Ashin of the North explored his backstory, his patriotism and his loyalty to the Joseon Kingdom was made even more evident. His levelheadedness was consistent with his previous appearances but this time around, the story explored his morality as well. It simply showed that no one was infallible in the face of keeping the peace.

Because of his connection with Ashin, it became even more exciting to see how his reunion with the orphaned warrior will be when they eventually come face to face with each other.

While Ashin was only an hour and a half long, it immediately had a huge impact in the franchise. I loved the consistency in the cinematography and the recreation of iconic scenes from the first two seasons. It really made fans want to review the entire series from the beginning straight after watching the special episode.

After fearing the zombies for the better part of two seasons of Kingdom, Ashin of the North made me want to root for them somewhat because of this special episode. As usual, I was blown away by everything, from the production, to the story (Kim Eun Hee), to the masterful direction (Kim Seong Hoon) — and to think this was shot during a pandemic. Amazing. The level of badassery in this installment was nothing short of masterful. Bravo! Well done, Netflix!