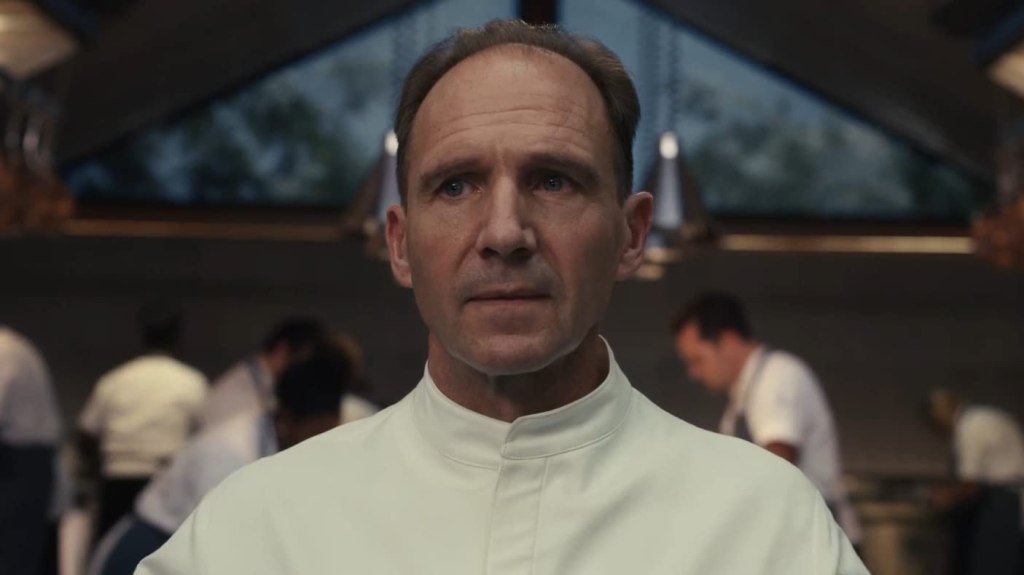 I was intrigued by The Menu so I decided to give it a try as soon as it came out on Disney+. It was led by a solid cast of Nicholas Hoult, Anya Taylor Joy, and Ralph Fiennes and from the poster alone, I already thought it had a very diabolical feel to it. Turns out, I was partially right.

Synopsis: Tyler (Nicholas Hoult) is a hardcore foodie. He is over the moon when he successfully books a sophisticated dinner at a private island owned by his idol, celebrity chef Julian Slowik (Ralph Fiennes). He brings along his date Margot (Anya Taylor Joy) to Hawthorne for a first-class service attended by a food critic and editor, a celebrity (John Leguizamo) and his paramour, an elderly rich couple, and three rich guys involved in stocks.

The Menu is presented as a quirky dark comedy with an underlying mystery. From the get-go, audiences could already tell that something was about to go wrong. It had a very low-key Midsomar feel that hinted at something sinister afoot.

With each dish that comes out, a new layer is peeled off Chef Julian’s grand plan. Each meal represents another rung to his hatred and eccentricity. Obviously, with everything that is happening, panic grows among the diners and their individual connection to the chef is slowly and painstakingly revealed.

The Menu requires your full attention, and Ralph Fiennes demands it with his commanding yet quiet presence. Anya Taylor Joy delivers as the feisty but innocent bystander who gets caught up in the entire mess of a service. She aptly showcased her intelligence and survival instinct with each challenge that came her way. The contrast between her and Fiennes’ character made their adversarial dynamic interesting — a welcome break from the general air of stoicism adopted by the film.

The Menu felt like a very sophisticated mystery that required a lot of patience. It was something that you should not watch when you are just about ready to fall asleep. It took time to lay the foundation and build suspense. Because of a lot of elements, it may seem quite tedious and suffocating for some viewers.

The film felt like it was lulling audiences into a trap, and yet they have no choice but to follow along to get to the final reveal, something that was foreshadowed all along by Tyler and his obsessiveness towards Julian.

All in all, The Menu was not a bad movie. It had an interesting premise and a creative approach to food and the artistry and passion involved in serving the perfect dish. And it was beautifully crafted. For me, it ticked all of the boxes for technicality — script, cinematography, scoring, acting — but I felt that the general sense of cynicism made it hard to connect with the film, or any of its characters.