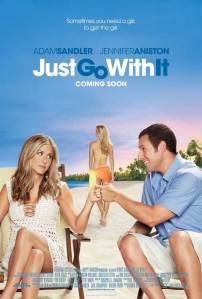 I pretty much don’t care if people call me an idiot for liking this movie. I know Adam Sandler has only one approach to gags and most of his humor is crass and recycled but I still think its funny. Adam Sandler movies are the types of flicks people want to see to laugh out loud and be entertained and that is what Just Go With It has going for it.

JGWI is a no brainer comedy about a successful plastic surgeon Danny Macabee (Sandler) who gets his heart broken by his fiance the day of their wedding. As he tries on his wedding ring and wallows in a bar, he accidentally discovers that some women have a thing for miserable loser husbands and this becomes his modus for the next 20 years. However, when he finally meets the girl of his dreams (Brooklyn Decker), a hot elementary school teacher who is a bit younger than he is (an understatement), the errant ring falls from his pocket and he is forced to lie through his teeth by saying that he is, in fact, getting a divorce from his mean wife. Enter the character of Jennifer Aniston as Katherine, his office manager and long time friend, who is actually a single mom with two kids. Danny convinces Katherine to pretend to be his estranged wife just to assure Palmer that they are on the verge of divorcing but things get screwed up when Palmer finds out that “they” have kids. Things go from bad to worse when they are blackmailed by these very same children to go on vacation together “as a family.”

Gags run aplenty in this romantic comedy filled with a lot of crude jokes, great scenery (it was shot in Hawaii) and interesting supporting characters. Aniston is an old hand at comedic timing, what with her 10 year experience in Friends and countless other Romcoms, and she was very comfortable with Adam. It was evident that everybody had fun on the set as the rapport was very well established in every scene. There was also a surprise appearance by Nicole Kidman as Devlin Adams, Katherine’s old college nemesis. It was nice to see big stars not taking themselves too seriously and taking on fluff roles so that audiences can see a side of them that they don’t get to showcase in heavy drama. Great casting choices for the kids — Bailee Madison (who is  incidentally connected to a big movie starring Katie Holmes’ Don’t be Afraid of the Dark) and Griffin Gluck never missed a beat among their adult co stars and delivered hilarious dialogue the way it was intended. Chuck and Larry co-star Nick Swardson also made an appearance as Eddie Simms, Danny’s cousin and sort of sidekick. I was waiting for the cameo of the usual guys but it never happened, which was odd, but nothing to write home about.

Another thing of note for this movie was the great soundtrack filled with over 40 songs featuring music from Snow Patrol, The Beach Boys, The Police and other great artists.

All in all, I had a blast watching this movie, and judging by the reaction of my friends who have seen it too,  it’s a hoot.