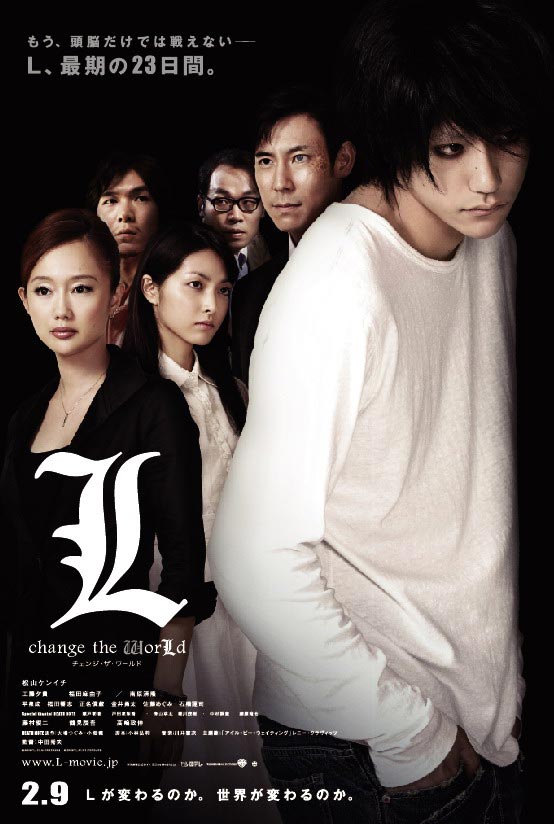 L: Change the World is the 2008 spinoff of the highly successful Death Note Live Action franchise released in 2006. If you haven’t seen the second Death Note (The Last Name), be warned as there might be some spoilers ahead as I unveil the plot of this final (?) installment.

The story takes place somewhere before the first Death Note movie, and slightly towards the end of  The Last Name. In order to defeat Kira, L (Ken’ichi Matsuyama) wrote down his name in the Death Note, sealing his own fate to ensure that no matter what Light’s plans are to destroy him, it will not succeed (He is to die 23 days later — the maximum time of survival allowed for persons whose names are written in the Death Note).  As the second film closes, several key characters including the first Kira — Light Yagami and L’s assistant/best friend Watari have perished. With some 20 days of life remaining, L tries to solve as many cases as he can, lending his assistance to agents throughout the world. For his last assignment, he finds himself faced with a group that seeks to exterminate mankind for profit and revenge with the use of a virus whose antidote is yet to be developed.

In this installment, L is saddled by not one but two children whom he must care for and keep safe as they are both essential in finding the cure for the virus, this while he tries to adjust to life without Watari.

I would like to cite what my fellow blogger iamipodman said about the movie. It is nowhere as good as the first two Death Note films. I agree, perhaps because the balance in this movie is somewhat compromised with the disappearance of Light Yagami, who is truly the only character in the franchise who holds a candle to L in terms of intellect and skill. This film, while it benefits from a sense of urgency from L’s limited time on earth, suffers by hardly being connected to the Death Note. Ryuk appears briefly in the beginning but that was just about the extent of his exposure. The villains are weak and are not by any stretch of the imagination worthy of L’s time during his peak. Had it not been for the kids, I doubt if L would have worked as hard on this case.

On the other hand, what’s refreshing about this chapter is that there seemed to be a different focus in the movie, which is to show a new side to L — one that is not totally sure of himself, one that can be shaken and one that is not completely invulnerable. This was the first time in three movies I’ve actually seen L in anything close to a panic. This was also the first time I’ve seen him engage in any physical activity other than hopping from one couch to another and stirring his tea with his lollipop. The movie illustrates how the normally cool L, tries to deal with his grief in losing the only stable person in his life and at the same time take on the responsibility of protecting two children when he himself lived in a dream world. I liked how L established his relationships with the kids, bribing them with sweets that he wanted more than they did, entertaining them, and making them feel somewhat normal. It was great to see the gradual shift in their relationship with the children’s body language loosening up as they begin to trust L more. I like how Boy started to stick to L like glue and mimic his movements, and I liked how Maki started to become part of their little family, if only for a while.

As a standalone, and a spinoff at that,  it was a good effort, although audiences would miss most of the characters from the first two movies, or simply the general feel of Death Note that was evidently missing in this film. As for me, I’m partly happy that I’ve finally finished the live action set (so I could move on to the anime) and partly sad that this was the last I would see of L. Not presenting a spoonfed ending was also a great touch which lent to the sense of melancholy and drama to close the series. I am satisfied.